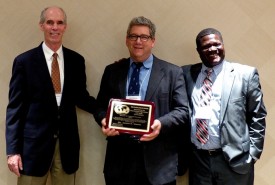 Rutgers Professor James (Jim) Simon, Department of Plant Biology and Pathology, has won the 2014 AIARD Special Service Award in recognition of his collaborative research in sub-Saharan Africa and elsewhere for over 20 years and his ability to use innovative and transformative approaches that lift people out of poverty. This recognition was bestowed upon him at the 50th anniversary meeting of the Association for International Agriculture and Rural Development in Washington, D.C. on June 2.

Simon is internationally known as a leading global researcher for his work in horticulture, medicinal and aromatic plants in which he specializes in plant natural products and new crops.

Simon is a “21st century ‘Indiana Jones’, a true global leader in the exploration of exotic genetic resources of plants that offer promise in a wide range of uses,” says Robert Goodman, executive dean of Rutgers School of Environmental and Biological Sciences.

Stephen Weller, professor at Purdue University, who supported Simon’s nomination for the AIARD award said, “Dr. Simon’s ability to build teams, and to conduct science under tough conditions and to bridge the different fields of botany with horticulture/agronomy/food science to phamacognosy and product development is a rare ability.”

Simon was also acknowledged for his ambitious goals and high impact work. Elizabeth Mitcham, director of the Horticulture Innovation Laboratory at the University of California—Davis, noted that “Dr. Simon typically exceeds his own ambitious goals and delivers larger impacts than his projects originally propose.”

He’s a key collaborator in the non-governmental organization AgriBusiness in Sustainable Natural African Plant Products (ASNAAP), which he co-founded in 1999 with USAID funding. He also leads a USAID-funded project in Liberia; recently completed a project in Namibia and runs two USAID Horticultural Innovation Lab projects in Kenya, Tanzania and Zambia in addition to horticultural research work he does at Rutgers Snyder Farm in Pittstown, New Jersey. These projects involve a diverse set of skills, which include new plant variety breeding, project development and standardization, value added agricultural production, education curriculum development and faculty training.

Simon was also the 2012 winner of the BIFAD award for research excellence and impact for USAID Innovation lab programs.