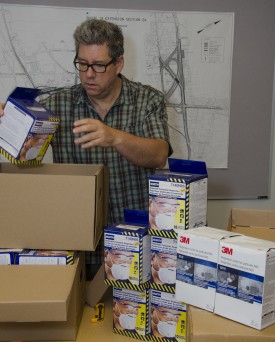 Jim Simon sorting supplies bound for Liberia at the REHS building on the Livingston campus.

In August, Jim Simon, professor of plant biology and pathology at Rutgers, “just couldn’t sit still and do nothing” when, like the rest of the world, he began to get a better sense of the growing threat of the Ebola virus in West Africa through daily news reports. In addition, he was getting frantic requests for medical supplies and protective gear from colleagues attached to partner institutions in Liberia, in particular the JFK hospital at the University of Liberia and the Agave teaching clinic at Cuttington College.

Simon felt he needed to mobilize some effort to get desperately-needed supplies to folks on the ground, especially in Liberia, which has emerged as the country hardest hit by the epidemic. A member of the Princeton Fire Department, he’s been trained in Incident Command & Emergency Response and was a Lieutenant in Hook and Ladder Fire Company. “Because of my training, I had a sense of the need for logistical and practical support by the folks who are in the midst of dealing with an emergency,” said Simon.

He and several Rutgers colleagues, including faculty and staff from the Centers for Global Advancement and International Affairs, Center for African Studies, School of Pharmacy, The New Jersey School of Medicine in Newark,  Robert Wood Johnson Medical School in New Brunswick and myriad other units, identified Liberia as the beneficiary of their immediate fundraising efforts due to the existing ties between Rutgers and Liberia.

“Over the past several years, we’ve had several projects in Liberia involving Rutgers faculty and researchers and it felt like we’d be in a strong position to help Liberia and to target our efforts at getting needed medical supplies to the hospitals and clinics associated with the Liberian institutions with which we have strong ties,” said Simon. 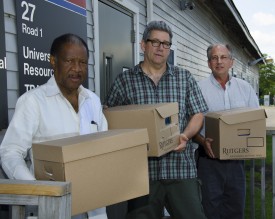 One project in particular is a five-year program, which began in 2011, called the Excellence in Higher Education for Liberian Devel­opment (EHELD) that is being funded by an $18.5 million grant from the U.S. Agency for International Development. Under EHELD, Rutgers, as part of a consortium of American universities, will send approximately 45 faculty members and staff to educate engineers and agricultural scientists at the University of Liberia and Cuttington College. The program will simultaneously support the graduate studies of over 12 current and future faculty members at both of these Liberian higher education institutions.

“Rutgers has programs that focus on sustainable development of Liberian’s natural resources and plant products for income generation in rural areas of the forests and members of the Rutgers School of Social Work have been awarded a grant to study sexual violence within families and communities in rural Liberia,” added Simon.

What Simon and his Rutgers colleagues did over the course of just three days in August was establish a website seeking donations through the crowd sourcing site GoFundMe, which generated over $9,700 during its first month. A $30,000 donation has come directly from Starr International Foundation to assist with the purchase and shipping of additional materials.

“Members of the Rutgers community, the Princeton Fire Department and residents of New Jersey have been incredible in their  response to our requests,” said Simon. Their donations will be used exclusively to help purchase supplies and fund the cost of sending those supplies to Liberia. Any work related to this effort is provided 100% by volunteers here and in Liberia.  Colleagues in Liberia meet all incoming supplies upon arrival at the airport to ensure that donated materials reach the intended hospitals and clinics. 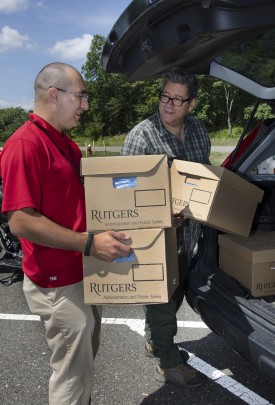 “Among the first set of items procured were gloves, booties, scrubs, face masks, respirators, and Tyvek or body suits, which are in stock at the university as part of our planning for emergencies,” said Alejandro Ruiz, university safety officer at Rutgers Emergency Health Services (REHS) and the Office of Emergency Management, in the Division of Administration and Public Safety. Ruiz and Tom Block, health safety specialist at REHS, have been instrumental in procuring the supplies and protective clothing that are most needed by frontline healthcare workers.

During a recent visit to the U.S., which included stops with partner institutions including Indiana University, Savannah State, and Rutgers University, Emmet Dennis, President of the University of Liberia, was presented with more than 750lbs of medical supplies and protective gear. This is the first of several such donations that members of the Rutgers community have pitched in to procure through its fundraising efforts.

Dennis, who was born in Liberia, lived there until 1980 before coming to the U.S. While serving as the vice president for student affairs at Rutgers in 2007, he was tapped by Liberia’s President Ellen Johnson Sirleaf to serve as technical advisor to the country’s ministries of Education and Health. Dennis ended up on a short list of candidates to lead the University of Liberia, the oldest degree granting university in West Africa, and was inaugurated in March 2009 as its 13th president, charged with rebuilding the institution following more than a decade of civil war. Dennis had a 35-year career at Rutgers, including serving as a full professor of cell biology and neuroscience, dean of the former University College-New Brunswick and associate provost for academic advancement for the New Brunswick campus. 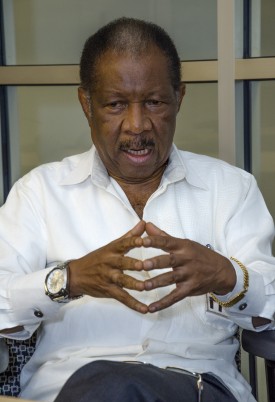 SEBS/NJAES Newsroom sat down for a Q & A with Emmet Dennis during his visit.

What are some of the biggest challenges facing Liberia as it responds to the Ebola outbreak?
The fact that Liberia is a post-conflict country, its health infrastructure was not as sound as it should be and therefore not prepared for the spread of such a disease. Also, certain cultural traditions do not facilitate the control of this disease—for example the preference for home care of ailing relatives rather than taking them to the hospital. In that altruistic environment, the disease started snowballing until it overwhelmed the country. And, healthcare workers do not have the proper equipment and protective gear.

What has been the response from the Rutgers community?
I’m so pleased to see how members of Rutgers have come to the aid of Liberia, through the University of Liberia and the connection I enjoy with both academic institutions. The response from Rutgers has been tremendous, where in as little as 72 hours during my visit to New Jersey, faculty and key units at Rutgers set up a website to make immediate donations and provided needed emergency and protective gear for me to take back to Liberia. My 35 years association with Rutgers, both as a faculty member and in my various administrative positions in student affairs, has been very beneficial. I am overwhelmed with the response.

What sort of donated gear and equipment have you received so far?
The Rutgers Environmental Health and Safety, and the Office of Emergency Management, part of the Division of Administration and Public Safety at Rutgers, have been particularly generous, donating gloves, booties, scrubs, respirators and Tyvek suits. The suits serve as a protective barrier for healthcare workers providing the immediate care. We had to bear in mind that the donated items needed to be very portable, as I will be bringing them when I fly back to Liberia the next day. So mobility was a key factor as well as they needed to be items that are most needed by the folks on the front lines of this disease in Liberia.

Looking ahead, what sorts of ongoing Rutgers and Liberia connections do you envision following this immediate Ebola crisis?
The government and medical community in Liberia are grappling with the implementation of a scientific regime, such as recommended by the Centers for Disease Control and Prevention, for the control of this highly pathogenic disease within the context of cultural traditions. I’ve been raising the possibility, once Liberia is past the crisis of this disease, how Rutgers sociologists, anthropologists and medical colleagues alike can bring their expertise to bear on the question of how does a country like Liberia, given the kinds of cultural traditions that can impede a rapid response, nonetheless develop logical, scientific regimens to respond to similar and future disease outbreaks. Perhaps a conference that taps into the expertise here at Rutgers. I’d be delighted to help facilitate that.