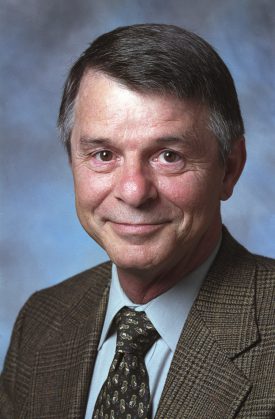 Tim, the son of a steelworker, was raised in Bethlehem, PA, and received his bachelor’s degree in zoology at Penn State before moving to the University of California–Los Angeles to pursue graduate degrees in comparative and ecological physiology. He received his Ph.D. in 1972 under the guidance of George ‘Bart’ Bartholomew, arguably the most influential ecological physiologist of the mid-20th century.

Tim joined the faculty of Rutgers in 1977 and was promoted quickly to the rank of Professor by 1984 and to the rank of Distinguished Professor (formerly Professor II) by 1988. To my knowledge, nobody before or since has been promoted through the ranks so quickly. Throughout this period, Tim collaborated broadly and continued to publish influential papers on thermal ecology, biomechanics, and flight physiology in insects. He has placed students and post-docs in academic positions in the U.S., Australia, and Europe.

In 1991, Tim became Chair and Graduate Director in the Department of Entomology, and thus began a distinguished series of administrative roles, including stints as Acting Executive Dean of Cook College and Acting Executive Director of the New Jersey Agricultural Experiment Station in 1995-96. During this period, Tim played a very active and important role in the founding of the Department of Ecology, Evolution, and Natural Resources, which merged members of the faculties of SAS (then FAS) and Cook College. In fact, if Tim and several others hadn’t held their positions at that time, it is quite possible that DEENR would never have been founded. Subsequently, Tim served three executive deans as Dean of Academic and Student Programs for Cook College from 2003-06 before becoming Director of the General Honors Program of SEBS, a position he held for about 10 years, beginning in 2006.

Tim has given his heart and soul to Cook College and SEBS for 40 years, and he has been deservedly recognized for his contributions with awards for research, team teaching and sustained academic excellence. His culminating award, which I suspect he holds dearest, is the Barbara M. Goff (Alpha Zeta) Teacher of the Year award. Tim has been an influential teacher, mentor, and change agent for many, many students.

At a personal level, let me just add that Tim has played an important guiding role for me almost from the beginning of my professional career. As a graduate student, I met Tim in Toronto in 1981, where his student, Terrie Williams and I both contributed to the same session at the annual meeting of the American Physiological Society. A few years later, as chair of the search committee, Tim recruited me to Rutgers for a position that was meant to bridge the existing faculties in physiology and ecology. Throughout my early years, Tim was unfailingly generous with advice and equipment, and I had the privilege of co-teaching several graduate seminars with him. In recent years, Tim has been dealt a challenging hand, but this has only given him another opportunity to demonstrate his generosity of spirit, his grace and dignity. I feel very fortunate for the influence Tim has had on me, and I feel truly honored to have had this chance to summarize for all of you Tim’s long, productive and distinguished career.

We’ll all miss Tim as an active member of our faculty and welcome his contributions as Professor Emeritus.