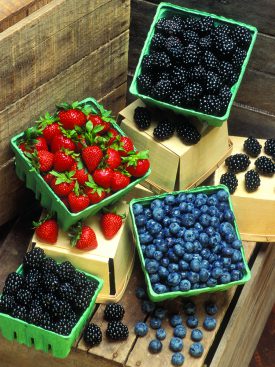 Note: Fresh local berries are in season during the spring and summer in New Jersey – strawberries from Mid-May to mid-June, and blueberries from mid-June until August.

Eating berries is healthful and may help your brain to improve your memory. The latest research indicates that we are eating more berries than in the past. They are a great source of vitamins, minerals and fiber along with flavonoids, a diverse group of phytonutrients (plant chemicals) found in almost all fruits and vegetables. Along with carotenoids, they are responsible for the vivid colors in fruits and vegetables. Flavanols, a type of flavonoid, are found in berries giving them antioxidant and anti-inflammatory effects that reduce and repair cell damage. Anthocyanins found in red, blue and purple berries can cross the blood-brain barrier to protect the brain cells from aging and also diseases such as cancer. Some recent studies conducted on humans show promising results. However, more research needs to be done. Below are some reasons to increase the number of servings of berries that you eat weekly.

Berries Improve the Memory. A study conducted with young and old adult participants who ate blueberries, showed an increase of blood flow to key areas of the brain, improvements in memory and attention to required tasks. Other tests with seniors eating strawberries and blueberries for several months showed improved memory as compared to those in a placebo group. Additional studies with children drinking smoothies made with berries, showed an increase in memory tests as compared to those drinking non-berry smoothies.

Aging Process Decreases with Berry Consumption. Improvements in brain function may help fight the natural decline that happens during the aging process. An increase in the number of new neurons in the brain, a result of consuming berries, may be one reason that the aging process slows down. Recent clinical research has demonstrated that berries can prevent age-related neurodegenerative diseases and improve movement and brain function. Berries can also change the pathways involved in causing inflammation, cell survival, nerve cell transmission and ability of the nerve cell to be flexible. The neuroprotective effects of berries on neurodegenerative diseases are related to phytochemicals (plant chemicals) such as anthocyanin, catechin, and quercetin. More studies with humans are needed to replicate the results that have been published.

Preventing Dementia is Hopeful. Vascular dementia is caused by clogged arteries and veins which slow down the blood flow to the brain. Eating more fruit and vegetables, including berries, seems to protect the brain. Compounds found in berries, not only protect the brain from oxidative stress, but also counteract advanced glycation end-products called AGEs, which have been linked to other age changes such as Alzheimer’s disease. Alzheimer’s is one type of neurodegenerative disease, an umbrella term for a range of conditions which primarily affect the neurons in the human brain. Neurons are the building blocks of the nervous system which includes the brain and spinal cord. Neurons normally don’t reproduce or replace themselves, so when they become damaged or die they cannot be replaced by the body. Examples of neurodegenerative diseases include Parkinson’s, Alzheimer’s, and Huntington’s disease.

Multiple studies demonstrate the benefits of berries including the protection against the negative effects of a high fat diet and the ability to boost a person’s mood and decrease the risk for developing depression. Many of the controlled human trials have used blueberries, however other berries, including raspberries, blackberries, and strawberries, also have many of the bioactive compounds that improve brain function.

Eating berries on a regular basis along with other fruits and vegetables will ensure that the protective compounds of berries are in your blood stream helping to improve your brain function at all ages. Take small steps to include berries on your cereal for breakfast, include berries in a smoothie for lunch, or try adding berries to a salad, main dish or dessert for dinner. Berries provide a healthful addition to a regular diet.