Four Rutgers faculty from SEBS and NJAES are currently engaged in a number of projects funded by the New Jersey Sea Grant Consortium, an affiliation of colleges, universities and other groups dedicated to advancing knowledge and stewardship of New Jersey’s marine and coastal environment, whose mission is “to promote the wise use of New Jersey’s marine and coastal resources through research, education, and outreach.” To meet its mission, NJ Sea Grant supports programs designed to resolve coastal issues, develop marine technology, formulate science-based policy, and improve science literacy among its citizens. 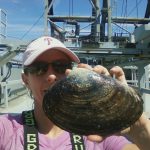 As farms expand and new farmers enter the industry, it will be important for farmers to find ways to diversify their business models in terms of species produced to create more robust and resilient businesses.

The rufa, a subspecies of the red knot oyster, was recently federally listed as threatened. The U.S. Fish and Wildlife Service has been charged with implementing strong protection measures that will ensure the persistence of the subspecies.

Principal investigator Brooke Maslo, specialist in wildlife ecology, and team received NJ Sea Grant support for their study identifying and resolving potential conflict between the oyster aquaculture industry and red knot conservation groups by providing a baseline understanding of how intertidal rack and bag oyster aquaculture, as it is currently practiced, may be affecting red knot foraging.

Delaware Bay is a critical stopover site for the rufa subspecies of the red knot, which migrates from its wintering grounds in the southern reaches of coastal Argentina to its breeding grounds in the Canadian Arctic. The 7,000+ mile journey is energetically taxing, and red knots must stop and ‘refuel’ along the migratory pathway. Red knots rely heavily on the lipid-rich eggs deposited by spawning horseshoe crab females in Delaware Bay to gain enough weight to complete their migration and begin their breeding season. Overexploitation of horseshoe crabs, combined with the loss of their spawning habitat, has reduced this critical food supply and is associated with dramatic declines in red knot populations in recent years, threatening the species’ persistence. 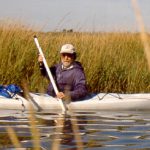 Global climate change will be particularly relevant to estuaries and the fish nurseries that utilize them. Estuaries may be especially susceptible to climate change because they are relatively shallow and this effect may be compounded by greater anthropogenic influences such as development, pollution, and habitat degradation as a result of human pressures.

Principal investigator Kenneth Able, distinguished professor, and team received NJ Sea Grant support for their study determining the impact of changing temperature and other environmental variables due to climate change on estuarine fish recruitment. The study analyzes time-series data over seasonal and annual periods from a representative New Jersey estuary. More specifically, to test the response of larval and juvenile fishes to climate change, this study will examine species composition, abundance, size, and phenology relative to environmental variables from 25 years of data collected at weekly-to-seasonal frequencies.

The study will determine the effects of climate change on estuarine fish nurseries. It will help plan for management and related estuarine impacts on important commercial and recreational fisheries. And it will also help us understand the impact climate changed estuaries will have on our fisheries, thus help us to evaluate their resiliency. 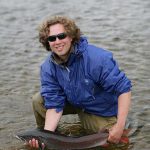 The striped bass fishery remains one of the most important fisheries along the Atlantic coast. In New Jersey it is an extremely important species for the recreational fishing industry with the spring and fall fisheries providing an economic boost to the industry. Since 2003, however, biomass has been on the decline and scientists are uncertain about the reason for the decline.

Associate Professor Olaf Jensen, fish ecologist, and team received NJ Sea Grant support to investigate the presence of juvenile striped bass in Great Egg Harbor, Mullica River – Great Bay and the Navesink and Raritan rivers. With the assistance of recreational angler, they capture juvenile striped bass for laboratory analysis. Fish ear bones, known as otoliths, contain a chemical record of the water the fish inhabited at different points in their lifetimes. Using microchemistry techniques on otoliths from juvenile striped bass captured in these estuaries, the team will identify when they entered the estuary and determine if they originated locally or from one of the larger regional estuaries such as the Chesapeake, Delaware, or Hudson. They will also compare growth rates of juvenile striped bass that remain in the estuary where they were born to those that migrate to a different estuary.

The results of the project will provide fishery managers with an understanding of how small estuaries contribute to the overall stock of striped bass.