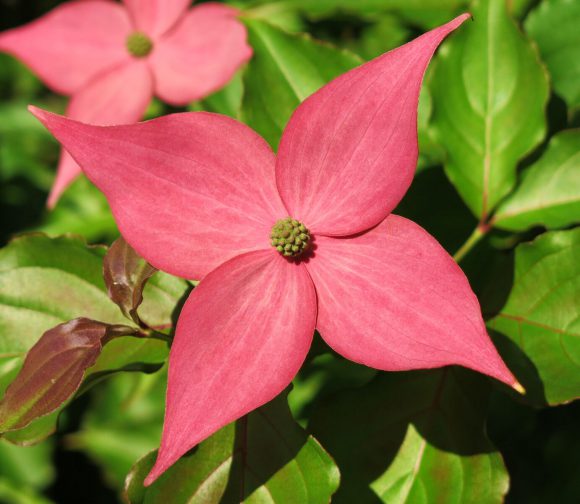 For years Tom Molnar, assistant professor in the Department of Plant Biology and plant breeder for the New Jersey Agricultural Experiment Station, and his team have been meticulously cross-breeding dogwoods with the goal of producing a hardy, fast-growing plant with blossoms of deep pink – a shade of pink that wouldn’t exist in nature without man’s help. And they hoped they’d find success in time for the 250th anniversary.

Young dogwood trees usually take five years to produce blossoms, though, which means the average horticulturalist sees only a handful of “generations” during a career. So, there were low expectations for the trees in Row 11, because the plants were only three years old. But dogwood tree “1121” – Row 11, Tree 21 – had different plans.

“It flowered in the third year, earlier than all its brothers and sisters,” Molnar said. “The color was incredible. It blew us away. We couldn’t even believe it was a dogwood.” They named it ‘Rutpink’ Scarlet Fire – Scarlet in honor of Rutgers, and Fire for the intensity of its color.

This is the first Cornus kousa variety released in over 45 years of breeding and decades of work started by renowned breeder and professor emeritus Dr. Elwin Orton in the 1970s. Indeed, Molnar credits his predecessor, Elwin Orton, with beginning the long quest for a deep pink version. When Tree 1121 produced its startling flowers, Molnar called Orton, then retired, with the news.

The Scarlett Fire Dogwood joins the Rutgers Scarlet strawberry and the Rutgers 250 heirloom tomato as new plant strains bred to celebrate Rutgers’ 250th anniversary. The plant was sold in limited quantities last year, but will be more widely available through mail-order nurseries in 2017, including Wayside Gardens and Spring Hill Nursery.