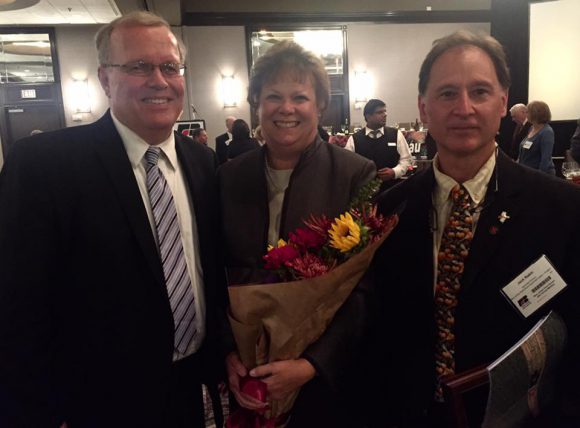 Jack Rabin, associate director for farm programs, NJAES, has been awarded the New Jersey Farm Bureau Distinguished Service to Agriculture Award for 2016, presented at the Farm Bureau Annual Meeting on November 14 at the Westin Princeton Hotel in Princeton, NJ. The award is presented annually by Farm Bureau, the state’s largest membership organization representing farmers and the wider community of agriculture.

In addition, Rabin has worked on a range of initiatives leading to outcomes like the delineation mapping underpinning the Outer Coastal Plain American Viticultural Area (AVA) designation in 2007, and legislative testimony supporting passage of the New Jersey Community-Based Deer Management Act in 2000. He’s also taught classes in sustainable agriculture and agritourism, and has offered summer research farming internships to undergraduates, helping them find career paths.

“Jack’s career as a county agricultural agent and later as research farm administrator for the Rutgers Ag Experiment Station brought an unusual level of farm expertise, passion and love of agriculture that makes him unique in his contributions to commercial agriculture in New Jersey,” said New Jersey Farm Bureau executive director Peter Furey.

“He has a legion of friends and admirers among farmers throughout the state but especially in the South Jersey vegetable industry, many of whom have materially profited from his advice and support over many years. His retirement comes too soon, but we wish him well in his new life with his family in California.”