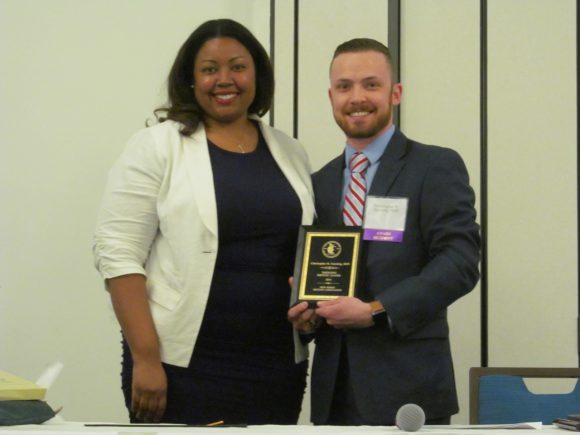 Christopher Gunning, RDN, was recognized as the 2016 Emerging Dietetic Leader for the State of New Jersey by the New Jersey Dietetic Association (NJDA) and the Academy of Nutrition and Dietetics at NJDA’s 84th Annual Meeting on May 6. This award recognizes the competence and activities of members, regardless of their age, who are at the beginning of their dietetics careers. Members who receive this honor support the promotion of optimal health and nutritional status of the public through demonstrating leadership in legislation, research, education, management, and other areas related to the profession. Only one member of the NJDA is recognized with this award each year.

Gunning currently serves as the clinical nutritionist for Rutgers Student Health Services. He is the program lead for the New Jersey Institute for Food, Nutrition, and Health’s Health Information Technology in the 21st Century (H.I.T. 21) thematic program and the first clinical nutritionist hired jointly by Rutgers Student Health Services and the IFNH. Gunning has helped build the university’s nutrition counseling services, not offered prior to his hiring, and now widely available to undergraduate and graduate students on the Rutgers—New Brunswick campus. 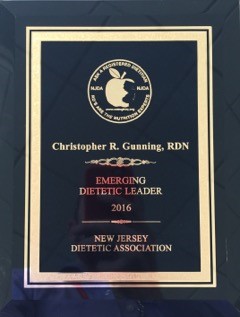 An executive board member of the NJDA for four years, Gunning currently serves as the web chair, helping to overhaul and launch a new website for the association. He previously served as the Region One co-chair (2013-2015) and a member of the Awards Committee (2012-2013). He has also been involved at the national level, serving as the professional development coordinator for the National Organization of Men in Nutrition (NOMIN), a member interest group of the Academy of Nutrition and Dietetics.

Last fall, the Academy of Nutrition and Dietetics recognized Gunning as a leader and role model in the field of nutrition and dietetics and showcased him as one of four subjects for their Men in Dietetics short film. Since its release, this film has been distributed nationally to high schools across the country and viewed by thousands of students to help promote nutrition and dietetics as a viable and rewarding career path for young male students. Currently, male registered dietitian nutritionists (RDN) and dietetic technicians registered (DTR) represent only 3.5% of the 75,000 plus members of the Academy of Nutrition and Dietetics.

On June 1, Gunning will begin a two-year term as the chair for NOMIN and will continue to promote dietetics careers to all males and help to support members in the field to grow personally and professionally.