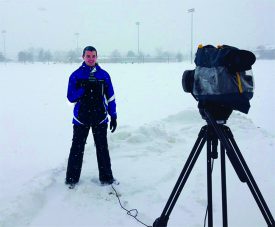 Since 2002, budding meteorologists who enroll at Rutgers get a head start on their careers thanks to a one-of-a-kind WeatherWatcher program where meteorology majors rub shoulders with non-meteorology undergrads who “live and learn” as peers tied together by their interest in weather broadcasting. One of several living-learning communities at Rutgers, the WeatherWatcher program is a partnership between the meteorology undergraduate program and the Rutgers University Television Network (RU-tv).

These “weather watchers” learn how to deliver daily pre-recorded weather broadcasts using the green screen in a professional television studio located on the first floor of Perry Hall, one of the residential dorms on the G. H. Cook Campus. Broadcasts are shared across the New Brunswick campus on RU-tv and streamed online.

Although open to non-meteorology students, the WeatherWatcher program has created a definite benefit for meteorology major Tyler Case (SEBS ’15). Case knew coming into Rutgers that he wanted to major in meteorology and work in the field, so he enrolled in the WeatherWathcher program in his first year. He valued the close-knit feeling of both the living-learning community and the meteorology program. “It’s not every day that you walk down the hall and your professors all know you by name.”

According to Steven Decker, professor in the Department of Environmental Sciences and the new director of the meteorology undergraduate program, while students in the program get access to the weather science and the support of the meteorology program, they fairly independently produce high-quality weather broadcasts for the campus community. 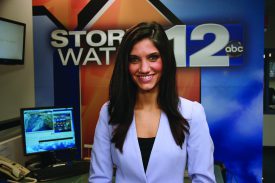 In 2014, the WeatherWatcher program acquired a WSI Max Weather real-time forecasting system, the same technology used by broadcast outlets such as ABC, FOX, CNN, and CBS. Alan Robock, distinguished professor in the Department of Environmental Sciences, who until June 2015 directed the meteorology undergraduate program, helped secure the funds for this state-of-the-art tool that’s helped prepare undergrads for professional broadcasting careers right out of college.

Even before he graduated in May 2015, Case was hired as a meteorologist at ABC affiliate KTWO-TV in Casper, Wyoming. He’s among notable alumni of the WeatherWatcher program, which includes Dylan Dreyer (SEBS ’03), meteorologist on NBC’s Weekend Today Show; Lauren Casey (SEBS ’06), who just joined the CBS3 Eyewitness News weather team in Philadelphia in September; Alyssa Caroprese (SEBS ‘12), current weekend meteorologist on CBS-affiliate WRGB, in Albany, NY, who got her start at ABC-affiliate KDRV-TV in Medford, Oregon; Mark Elliot (SEBS’04), currently an 0n-camera meteorologist at The Weather Channel; and Kelly Ann Cicalese (SEBS ’11), currently at WSAZ in Huntington, W.Va., and the winner of the “Best Weather Broadcaster in the State of Wyoming” award in 2013.

Editor’s Note: This story first appeared in the Fall 2015 issue of Explorations, a publication of the Rutgers School of Environmental and Biological Sciences.