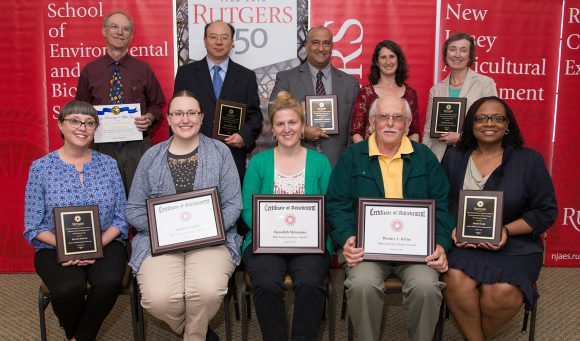 On April 21, faculty, staff, and students attended the 23rd annual Celebration of Excellence for the School of Environmental and Biological Sciences and the New Jersey Agricultural Experiment Station held at Neilson Dining Hall.

Following are the Excellence Award recipients along with excerpts from Ludescher’s presentation. 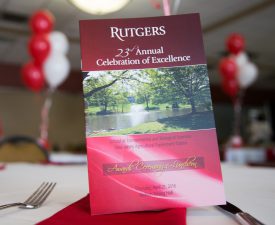 Marci teaches courses in geographical information systems (GIS); she mentors students in GIS research projects; she organizes an annual GIS Day in the Fall.  She especially loves educating students about GIS and its potential.

Her commitment to education is evident to all.  Her unique teaching approach fosters a deep understanding and appreciation for the material.  Her courses provide students with an opportunity to learn outside of the traditional lecture format and join in discussions of the material, whether in class or in online fora.  She loves to guide young scientists through the theory of geomatics and the many applications of geographic information systems to analyze problems in biology and ecology, guiding students along the learning curve in such an approachable fashion that, as one of her nominators stated, “many of my cohort and I are now considered experts at our respective locations.”  Marci motivates students to independently learn the material and to think critically about their projects.

In the words of her nominator: “I cannot think of a more deserving candidate for this award. Her compassion, innovative teaching, and propensity to advise undergraduate research purely for educational purposes are rare traits to find at such a large university.”

Jennifer Francis is a climate scientist who studies the dynamics of sea ice in the Arctic and its influence on atmospheric dynamics.  The amount of Arctic sea ice appears to be connected to the strength of the upper atmosphere jet stream that flows from west to east across the northern hemisphere.  During years of less sea ice, the jet stream is weak and during years of more sea ice, the jet stream is strong.  This effect, the basis for Jennifer’s theory of Arctic Amplification, appears to have far reaching consequences.  A weak jet stream leads to a meandering path for the jet stream and is associated with persistence weather conditions such as droughts, heat waves or cold spells, and snowy winters.  In other words: a decrease in Arctic sea ice may result in persistent, extreme and inhospitable weather conditions.

For formulating a major new explanation that provides a testable hypothesis for how climate change can increase fluctuations in the weather in North America, and of course for her enthusiastic willingness to discuss her findings and interpretations with the mainstream public media, we are pleased to recognized Jennifer Francis with the 2016 Research Excellence Award.

After years as a consulting water engineer, Chris Obropta joined Rutgers and created the Rutgers Cooperative Extension Water Resources Program whose mission is to identify and address community water resource issues using sustainable and practical science-based solutions.  He and his team of water resource professionals have developed and delivered a wide range of educational programs to stakeholders ranging from K-12 students and their teachers, municipal officials and policy makers, practicing engineers, landscape architects, urban and regional planners, and the staffs of NGO’s and regulatory agencies.  These efforts have led to the development of three regional storm water management plans and nine watershed restoration plans and have delivered educational programs to thousands.  His extension work is an exemplar of how complex technical engineering concepts can be effectively disseminated to a wide and varied audience.

The global reach of research at the School and the Experiment Station is now and has been for decades, extensive; faculty members have ongoing projects with collaborators on literally all seven continents, as exemplified by the global research collaborations of the many previous winners of the International Excellence Award. Weilin Huang is being recognized for his significant impact on internationalizing the undergraduate curriculum.

The School has over the last decade led efforts at Rutgers—New Brunswick in the development of collaborative educational agreements with universities in China and elsewhere. Largely through his contacts, his vision, and his personal efforts, SEBS initiated the university’s first 2+2 program in Environmental Sciences with his alma mater the South China University of Technology (SCUT); in this innovative program, students transfer to SEBS from SCUT for their junior and senior years and graduate with degrees from both universities.  The overwhelming success of this pilot has led to expansion of the 2+2 model to other programs at SEBS, at the Edward J. Bloustein School of Planning and Public Policy, at the School of Communication and Information, and at the School of Engineering, to other Chinese universities, and to other education models such as a 3+2 program in which students from two Chinese universities can earn an MS degree in environmental science from Rutgers—New Brunswick. 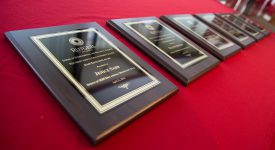 The School and the Experiment Station, as the Land Grant units of Rutgers University, serve the state of New Jersey and the world in many ways.  One of the most important is to provide workshops, courses and conferences in various areas of continuing professional education in a broad variety of fields.  These educational offerings only happen through the quiet, competent and efficient work of many people behind the scenes: planning, advertising, scheduling, and organizing.

As a senior program coordinator in OCPE, Dalynn organizes short courses in food science, public health, water and wetlands, and geomatics and large-scale conferences in all areas.  She brings to her position considerable knowledge in library science, extensive experience in event coordination, and an unmatched ethic of customer service.  Her work leading a team of 15 other professionals has measurably increased the visibility of the University, the Experiment Station, Cooperative Extension and OCPE.

It takes a village to educate a student.  Faculty members often forget the basic fact that navigating the academic complexities and realizing the enormous potential of a modern research university requires much more than just attending class and meeting course requirements.  It requires the daily application of a variety of life skills, application encouraged and supported by the work of many academic staff.

As the director of the SEBS Educational Opportunity Fund, Jenice leads a team of dedicated professionals who provide support to an academically vulnerable population of historically under-represented or first generation college students.  Her leadership has created a work environment that encourages staff professional development to aid in making innovative programs that enhance the diversity of the SEBS student population and that drive staff to promote access and opportunity.  These efforts enable students to explore non-traditional majors, actively engage in authentic research experiences, and become active participants in state and national discussions on such topics as clean energy or industrial agriculture.  For her service to our students and for her exemplary leadership of a vital academic support unit at the School, I am proud to recognize Jenice Sabb as a recipient of a 2016 Staff Excellence Award.

Food in America is perhaps safer now than it has ever been, perhaps safer than food has ever been at any time in human history.  But such safety is not automatic, it is not a given.  It only comes through diligence and hard work.

The Rutgers On-Farm Food Safety team is one of the reasons that produce for sale in New Jersey is safe.  This group has trained over 6,000 individuals in the New Jersey produce industry since 1999, nearly covering every produce operation in the state.  The team’s interactions with growers has raised the awareness of food safety from the status of “It’s not OUR problem” to “It must be OUR concern.”  The team has developed over 50 slide show presentations; written numerous training manuals, refereed journal articles, fact sheets, and articles for popular publications; distributed information through social media and the Rutgers NJAES Plant and Pest Advisory; and educated Extension professionals nationally.  Team members serve on national committees for the Food Safety Modernization Act, and on the commodity food safety guideline development and national audit harmonization committees.  The team evaluates pathogen risk on New Jersey farms and conducts research evaluating safety issues of irrigation water, of soils, of harvested produce, of animal based composts and of product contact surfaces. 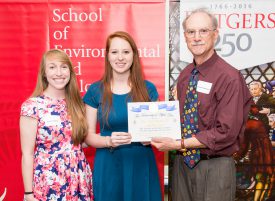 Each year students in Fraternity of Alpha Zeta Cook Chapter honor selected individuals for their contributions to the SEBS academic community.  This year’s winners were introduced by Sarah Waxman, a Food Science, Nutritional Sciences, and Biological Sciences triple major, and Nicole Tallman, a Meteorology major.

The Barbara Munson Goff Teacher of the Year Award was given to professor Rick Ludescher, Department of Food Science. 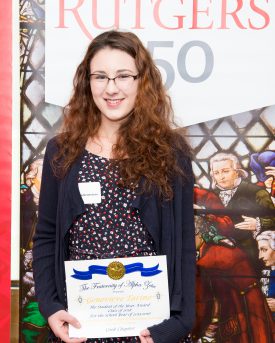 The Alpha Zeta Students of the Year Awards were given to: