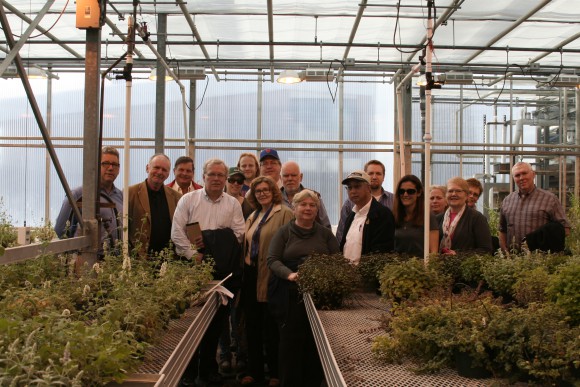 Prof. Jim Simon (far left) gave the Rutgers NJAES Board of Managers and guests a tour of his campus greenhouse.

The Board of Managers (BOM), an advisory group to the New Jersey Agricultural Experiment Station (NJAES), is made up of representatives from New Jersey’s county boards of agriculture. The BOM also serves as advocate for the experiment station and provides input to NJAES’ directors on matters concerning the state’s agricultural enterprise. In addition to quarterly board meetings where members listen to faculty talk about their programs, the BOM hosts an annual tour of NJAES research facilities to get an in-depth perspective of the agricultural research conducted by Rutgers faculty. The BOM representatives invite fellow county board of ag members as well as county legislators and state ag officials to attend the tour. The 2016 tour took place on March 24 and encompassed research conducted on the George H. Cook Campus in New Brunswick and at the Snyder Research Farm in Pittstown, NJ. The county representatives were joined by Al Murray, assistant secretary of agriculture, New Jersey Department of Agriculture, and Peter Furey, executive director, New Jersey Farm Bureau.

The on-campus portion of the tour was hosted by Jim Simon, distinguished professor of plant biology, and director of the New Use Agriculture and Natural Plant Products Program. A leading global researcher for his work in horticulture, Simon also focuses on medicinal and aromatic plants, and specializes in plant natural products and new crops. The first part of his tour was of the campus greenhouse where much of his breeding work with botanicals, such as basil, mint and catnip, is done. Simon began with an overview of some of the new plant breeds being released by NJAES, such as strawberries and tomatoes, and their potential for New Jersey’s direct markets. He then provided an in-depth presentation on his work with botanicals. This was a sensory presentation for the participants as it involved sniffing, tasting and picking an array of aromatic mints. Simon encouraged attendees to take cuttings from the diverse mint cultivars so they could propagate them on their own and introduce these unique varieties to customers. 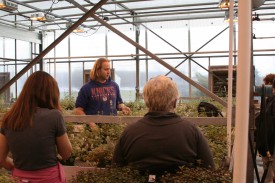 Simon also introduced the group to doctoral student in plant biology William Reichert, who discussed research on catnip breeding. Simon and Reichert have developed catnip lines with custom-designed essential oil composition. The “super” catnips can survive northern winters and produce ample amounts of aromatic oil rich in the bioactive compound that repels mosquitos and also drives cats wild. Up to now, catnip oil has been too expensive to use as a repellent, but it has been shown to repel mosquitoes, flies, cockroaches, termites, dust mites and deer ticks. In addition to this research, Simon is developing strains of sweet basil that are resistant to basil downy mildew.

In his laboratory in the Department of Plant Biology and Pathology in Foran Hall, Simon introduced the group to his colleague Qing-Li Wu, assistant research professor in the New Use Agriculture and Natural Plant Products Program, whose research focuses on the application and chemistry of natural compounds in medicinal plants, fruits, vegetables and microalgae, with application to nutrition and food science in the treatment/prevention of age-related diseases.

Simon showed attendees the laboratory equipment that assists in the research of these botanical compounds. This included a recently acquired, cutting-edge equipment designed to provide sophisticated odor analysis by combining a database of odor-causing substances and associated sensory information with a gas chromatograph mass spectrometer. 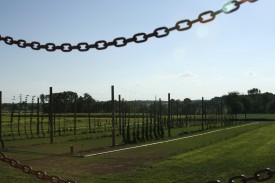 One of the many research trials on Snyder Farm involves hops production.

John Grande and farm supervisor Ed Dager took the group on a wagon tour of the farm. Grande explained the history of the farm and how it was acquired by Rutgers in 1988. Cowgill joined the tour and went into detail about his tree fruit research at the farm. Some of the areas of his research include rootstock trials, variety trials, growth regulator work and exploring different growing and methods/training systems. Fruit IPM agent Dean Polk was also on hand to talk about the tree fruit integrated pest management research that has been conducted on the farm. The BOM group also learned that Snyder Farm is a valuable teaching facility, serving both commercial growers and homeowners. Every year, the farm holds multiple grower meetings and demonstrations. In addition, it hosts public events that are designed to expose residents to the programs and research being done at Rutgers.

Overall, the tour group was impressed by the impeccable conditions of the farm as well as the diversity of the valuable research and outreach taking place at the Snyder Farm. BOM president Pat Butch said, “It is a beautiful research facility, immaculately maintained. I was very impressed with the wealth of knowledge available to the industry. It is also encouraging to learn about all the new fruit tree acreage currently being planted and the opportunities available for existing farmers as well as newcomers starting out.”

The up-close look at both the campus-based and Snyder Farm research provided valuable insight for the attendees to take back to their local boards and legislators. BOM vice-president Meredith Peters commented, “It was an excellent opportunity for people to see these outstanding facilities and the crew at the Snyder did such a great job in preparing for the tour. I know that the people that attended were very impressed with Jim Simon and the Snyder Farm.”