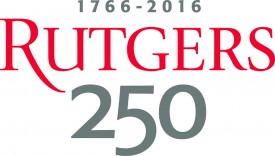 This year, Rutgers University is commemorating its 250th anniversary. To celebrate, the New Jersey Agricultural Experiment Station is selecting a plant bred at Rutgers as a Rutgers 250 Variety of the Month for each month of the year. This month’s variety (April 2016) is the Rutgers 250TM tomato! Rutgers’ tomato breeding program has been selecting for superior traits and improved genetics for generations.

Starting in the 1920s, tomato breeders have been using traditional, non-GMO breeding techniques to develop the best tomatoes for New Jersey’s ever-changing climate. Mainly focusing on red, fresh market and processing tomatoes, Rutgers tomato breeding efforts have also expanded to include smaller grape and pear-type tomatoes in the last decade. However, the main focus is to produce classic, high quality tomatoes that are suitable for the Northeast. 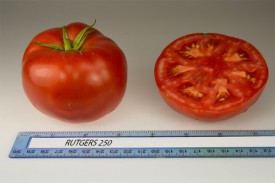 The tradition of strong breeding programs in the genetics of tomato at Rutgers has continued for nearly 100 years. Professor Lyman Schermerhorn worked on tomato breeding from the 1920s to the 1950s. He is most remembered for his work on the development and release of ‘Rutgers,’ a superior variety of tomato, in 1934. He was succeeded in 1960 by Bernard Pollack, who continued Schermerhorn’s program and released the popular ‘Ramapo’ variety in 1968. After Pollack retired in 1985, there was a gap in the Rutgers tomato breeding effort, although a strong variety evaluation program continued from 1985-2006 under the direction of Stephen Garrison and Joseph Steinke. Garrison also expanded the range of varieties tested to include processing and cherry and grape in addition to large-fruited fresh market tomatoes.

Thomas Orton restarted the Rutgers tomato breeding program in 2005. Since major vegetable seed companies in the U.S. have progressively relocated operations out of the east and Midwest to the south and the West Coast, the result was a void in varieties that are adapted to eastern conditions. Tomato farmers are at a distinct competitive disadvantage if they lack access to varieties that feature adaptation to local growing conditions. It was also decided that only traditional strategies based on whole-plant hybridization and selection would be employed, not cellular and molecular techniques typical of GMO products. These technologies are not inherently unsafe or ineffective, but ongoing public debate on the merits of GMOs and product labeling complicate the acceptance of GMO varieties in the marketplace. Therefore, non-GMO, advanced selection methods based on cellular and molecular technologies are used within the Rutgers breeding program, where appropriate.

Initially, the focus of the new Rutgers program was on locally-adapted fresh market and processing tomatoes, but small-fruited grape and pear types were added in 2010. The main focus of the fresh market tomato breeding project has been on value-added, consumer-driven attributes, including high fruit flavor, and better external and internal color. Attributes such as high yield, earliness, semi-determinate habit, and resistance to diseases and stresses typical of the East Coast have also been targeted. Starting in 2012, new F1 hybrid breeding lines were first tested. These showed promise for commercial tomato growers in New Jersey and the mid-Atlantic region of the U.S. New parental inbreds continue to be developed and tested in hybrid combinations by Rutgers and seed companies. F1 hybrid varieties have been targeted for release by 2019. 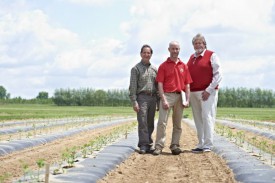 In 2010, an additional project was initiated with the Campbell Soup Company with the goal of re-developing the iconic variety, ‘Rutgers.’ This project culminated in the successful release of ‘Rutgers 250’ in 2016. This open-pollinated (like the original ‘Rutgers’) variety is intended for home gardeners. Extensive testing within New Jersey from 2012-2015 showed the new variety to exhibit high flavor, good fruit firmness and freedom from cracking and most other defects, semi-determinate growth habit, and adaptation to eastern U.S. growing conditions. Following limited release in 2016, larger volumes of seeds will be made available in 2017. The project has been extended to include the development of F1 hybrid derivatives of the ‘Rutgers 250’ TM inbreds. These prospective new varieties will possess firmer fruits to allow for shipping and handling, and documented resistance or tolerance to eastern U.S. diseases pathogens. The goal is for these varieties, suitable for wholesale commercial tomato growers who specialize in value-added fresh market products, to be ready in the near future.

Additionally, the current Rutgers tomato breeding effort also includes processing and small grape and pear types. The processing project has produced several new F1 hybrid varieties that have been grown on substantial acreage in New Jersey and used for production of tomato, pizza, and spaghetti sauces. These products are also grown and made in New Jersey. The small-fruited tomato project is relatively new. The aim is to combine high fruit flavor and more determinate growth habit with bicolor, peach, and blush fruit color motifs, which will bring value-added opportunities to New Jersey’s small roadside and farmer’s market growers.

The Rutgers NJAES continues to conduct research that assists farmers in adapting to threats such as heat, disease, and drought. Rutgers breeding programs include a selection process that identifies agricultural crop varieties that are naturally heat-tolerant and disease-resistant.

The tomato breeding program provides outreach to New Jersey farmers, helping them implement practices consistent with the reduction of pesticide use and the improvement of the overall quality of produce being grown in the region. More information about Rutgers varieties and our breeding programs, such as the Rutgers 250TM tomato, can be found at breeding.rutgers.edu. To find out more about the tomato program, visit http://njfarmfresh.rutgers.edu/JerseyTomato.html.