Recovering the Rutgers “Challenger” glider following its historic circumnavigation of the South Atlantic Ocean. (Click here to watch the video.)

After a historic circumnavigation of an ocean basin by the Rutgers “Challenger” glider, it was recovered on March 31 by an international team anchored by faculty and student oceanographers from Rutgers, and international partners that include the University of Las Palmas de Gran Canaria, University of Sao Paulo, University of Cape Town, and the South African Council for Scientific and Industrial Research.

The 282-day circumnavigation of the southern Atlantic Ocean basin by an autonomous underwater robot was completed in stages by the Rutgers glider, which was first deployed in January 2013 off of Cape Town, South Africa. It was recovered and redeployed off of Ascension Island in November of the same year, and landed in Brazil. Following its recovery off the coast of Ubatuba, Brazil, in May 2014, the glider began its history-making trek back to South Africa, completing another major achievement in modern oceanography. 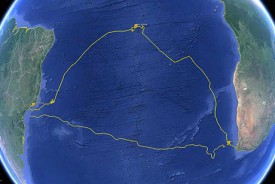 The Challenger Mission resulted from a challenge issued by NOAA to researchers from Rutgers’ Department of Marine and Coastal Sciences, following the successful crossing of the North Atlantic in 2009 by RU 27, another of Rutgers’s unmanned, underwater gliders. Named after the HMS Challenger, the first ship to complete a global marine research expedition from 1872-1976, this modern-day Challenger Mission is an educational and science initiative to conduct a global, robotic survey throughout the world’s ocean. The primary goals are to collect an unprecedented data set from the ocean that is fed in real time to U.S. global ocean models to better enhance their forecasts and to spread ocean literacy around the globe.

A previous Challenger Mission deployment, flown by Teledyne’s glider “Silbo,” went from Iceland to the Azores to the Canary Islands, and from the Canary Islands to Barbados, a mission that spanned from June 2011 to August 2013. Later this year, Silbo will be redeployed from Massachusetts to cross the North Atlantic to Northern Europe.

Rutgers scientists and students gather with partners from Spain, Brazil, South Africa, and the United States at Sea Technology Services with the Rutgers “Challenger” glider following its recovery from the historic circumnavigation of the South Atlantic Ocean.

After studying the data from the glider and a well-deserved cleaning, the Challenger glider’s next mission, circumnavigating the Indian Ocean, is planned for later this year where it will be deployed from the western coast of Australia to Indonesia and to Sri Lanka. Learn more about the Challenger Glider Mission.

The Challenger Mission, as a whole, has benefitted from the support of many others, including Teledyne Webb Research, the Vetelsen Foundation, Iridium, CLS America, the Explorers Club, NOAA IOOS, ONR Global, British Antarctic Survey, British Royal Air Force and the Challenger Society.