On May 18, scientists and engineers from the Rutgers Center for Ocean Observing Leadership (RU COOL) lab recovered RU 29 off the coast of Ubatuba, Brazil. The Slocum Electric Glider, which is part of Rutgers’ fleet of oceanographic research instruments, spent 189 days at sea traveling from Ascension Island, an isolated volcanic island located in the equatorial waters of the South Atlantic Ocean, to Brazil.  This recent leg of RU 29’s voyage began in November 2013. 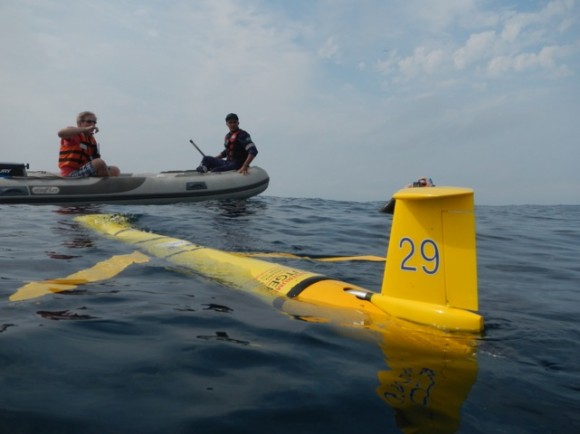 At left, Marcelo Dottori, professor at the University of Sao Paulo, Brazil, helps to retrieve RU 29 off the coast of Brazil, following its South Atlantic crossing.

A previous leg lasted 290 days and took RU 29 on a journey from Cape Town, South Africa, to Ascension Island throughout most of 2013. These two legs combined to help RU 29 complete the 10,387 km (6,454 mile) mission across the South Atlantic. Undergraduate students served as the main pilots of this mission, giving direction to RU 29 every few hours as it surfaced.

RU 29’s South Atlantic crossing is part of the Challenger Glider Mission, a two-year initiative to simultaneously pilot 16 ocean-faring robots around the world’s ocean basins led by members of Rutgers COOL. The goal of this global effort, which includes government, industry and academic partners, is to collect data while spreading ocean literacy and educating the general population about our changing planet. Rutgers COOL is still seeking donors to help purchase additional gliders for this mission.So far, the Challenger Glider Mission has seen the completion of a North Atlantic voyage from Iceland to Barbados via the Canary Islands by the Slocum Glider “Silbo,” while RU 29 has completed its South Atlantic crossing. Over the next month, RU 29 and “Silbo” will be deployed off of Cape Cod, Massachusetts, and Santos, Brazil, to set forth on return journeys across the North and South Atlantic.

The Challenger Glider Mission followed the successful crossing of the North Atlantic in 2009 by RU 27, another of Rutgers’s unmanned, underwater gliders. Dubbed “Scarlet Knight,” this glider made headlines around the world when it completed a transatlantic crossing from Tuckerton, NJ, to Baiona, Spain.

No sooner was Scarlet Knight on dry land when researchers from Rutgers’ Department of Marine and Coastal Sciences at the School of Environmental and Biological Sciences were challenged by officials at NOAA (the National Oceanic and Atmospheric Administration) to replicate the feat – this time around the world. Without hesitation, the team at the department’s Center for Ocean Observing Leadership (COOL) began work on the Challenger Glider Mission, which will run until 2016. The mission is named after the HMS Challenger, the first ship to complete a global marine research expedition from 1872-1976.

To learn more about the Challenger Glider Mission, visit the Marine and Coastal Sciences website.