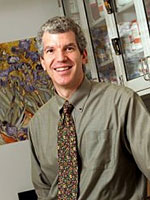 Paul Breslin, professor in the Department of Nutritional Sciences, has been elected to Distinguished Fellowship in the National Academies of Practice (NAP) and the Psychology Academy.

Breslin, who holds a doctoral degree in experimental psychology, is a NAP distinguished scholar, one of five categories of membership at the academy. He and the 2016 fellows will be formally inducted and will receive the coveted NAP medallion during the organization’s Annual Meeting and Forum, “Interprofessional Practice and Education: Embracing Transformational Change,” on April 8-9 in Baltimore, MD.

Made up of 14 interdisciplinary academies, NAP is an interdisciplinary group of outstanding healthcare leaders and practitioners who are working together to influence national health policy, legislation, and promote quality healthcare through cooperative advocacy, practice, education and research. NAP was founded in 1981 to advise governmental bodies on the U.S. health care system. The Psychology Academy shares with the other health care disciplines at NAP the ideal of health for all individuals in society and promoting the welfare of the public.

Breslin, who came to Rutgers in 2010, conducts research on the genetic basis of human oral perception and its impact on nutrient intake, and has been making his perceptual and sensory research on taste and smell more relevant for human health.

“The National Academies of Practice, I believe, is recognizing my attempts to engage in translational and clinical applications of my sensory research,” said Breslin.

Breslin has been involved in a number of collaborative projects at Rutgers, including research with Dina Fonseca, professor in the Department of Entomology, to use the sensory systems of mosquitoes to deter the spread of diseases like malaria and Zika to humans. This project was funded by the Bill and Melinda Gates Foundation.

Breslin and Michael Chikindas, professor in the Department of Food Science, are using microbes to make foods more palatable and also to target gut nutrient sensors, work which received an EVONIK Innovation award.

Research into treating Vitamin A deficiency by microbial fortification with beta carotene, work originally funded by the Bill and Melinda Gates Foundation, was a collaborative project among Breslin, Chikindas and Loredana Quadro, associate professor in the Department of Food Science. This joint project is now funded by a Busch Biomedical Grant to ensure the continuation of this promising research which has implications for the hundreds of millions worldwide who suffer from Vitamin A deficiency.

In addition, Breslin is collaborating with Jim Simon, distinguished professor in the Department of Plant Biology and Pathology, to formulate a nutrient supplement for malnourished children in Africa, and Patricia Whitley-Williams of RWJMS/Pediatrics to create an oral supplement to treat diarrhea, the number two killer of children worldwide, in a project funded by the AIAP (Ajinomoto Innovation Alliance Program). He is also collaborating on an NIH grant-funded project to study metabolic sensors of the oral cavity, which has implications for treatment of diabetes and metabolic syndrome, with Robert Margolskee of the Monell Chemical Senses Center in Philadelphia, of which Breslin is also a part-time member.