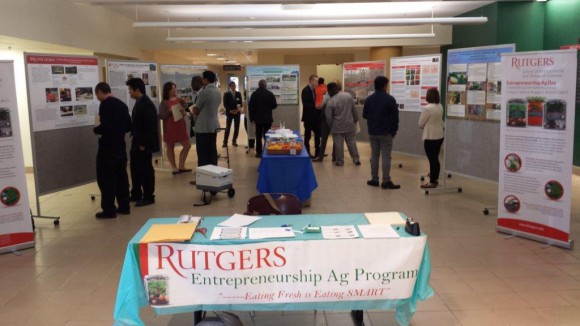 Boamah-Agyekum, Healy, Rodeo and Wortmann spent their internship working side-by-side at Horticulture Farm 3 on Cook Campus at Rutgers. The group spent endless hours outdoors to perfect the growth of African eggplant, Habanero peppers, African and American amaranth, and African and Indian okra. Once the crops were fully developed, the harvest was sold at the New Brunswick Community Farmers Market. During their individual presentations at EA Day, the students highlighted the prospects and challenges of engaging in production and marketing of the four ethnic crops.

Smith, another intern based at Horticulture Farm 3, focused his studies on the production on Tigernuts, a small-root vegetable superfood originating from North Africa and the Mediterranean. He hopes to commercialize the delicious tuber in the mid-Atlantic and open a small agri-business in the future. Fun fact: Tigernuts contain as much iron as red meat and as much potassium as coconut water! 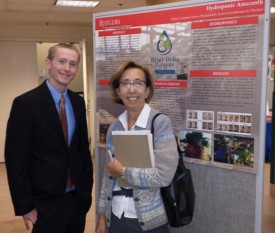 Marceski’s site of study was at the Rutgers EcoComplex where he was able to grow indoors African and American amaranth, a plant similar to spinach, rich in protein and vitamins K, A, C, B6. At EA Day, he shared that hydroponic vegetable production has become a passion that he plans to pursue as an entrepreneur. Marceski concluded his presentation with showing the audience “River Delta Greens,” the final product in a unique packing that he designed.

Xue spent his internship at Rutgers Agricultural Research and Extension Center and Rutgers Food Innovation Center in Bridgeton, NJ. His invention of “Peachberry” ketchup is sure to satisfy health-conscious consumers all over! During his presentation, Xue shared that he hopes to start his own business and have his trademark known through out the United States.

The day concluded with keynote speaker Reuben Canada Esq., founder of Canada Enterprises LLC, who is best known for Jin+Ja, a natural elixir made with ginger, cayenne pepper, green tea, lemon and mint. According to Canada, the secret to successful entrepreneurship is a combination of a well-defined vision, determination to succeed, innovativeness, team-work and continuous learning. It was clear at EA Day 2015 that all seven interns are in on Canada’s secret.