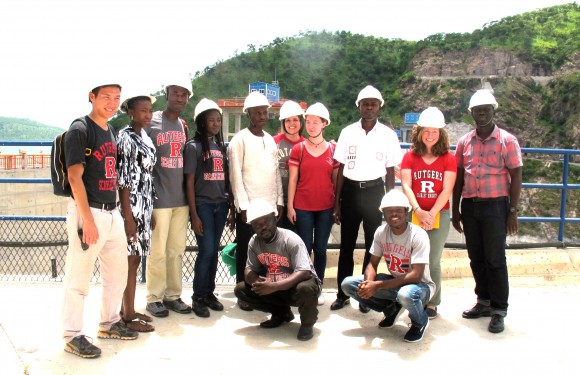 Augustus Chan (at left), Coryanne Mansell (standing, fourth on right), Heidi Hausermann (standing, second on right), a student from the University of Chicago, four students from Ghana’s University of Mines and Technology and other locals. They are pictured standing in front of the Bui Dam in Ghana.

Heidi Hausermann, professor in the Department of Human Ecology and recipient of a 2015-2016 Fulbright Scholar Grant for research in Ghana, took two Rutgers University students with her on a field trip to Africa this past summer. The students’ participation was made possible by funding from Rutgers Centers for Global Advancement and International Affairs and the School of Environmental and Biological Science’s (SEBS) Department of Human Ecology, among other sources.

Augustus Chang (Rutgers Robert Wood Johnson Medical School ’19) and Coryanne Mansell (SEBS ’15) worked alongside a student from the University of Chicago and four Ghanaian students from the University of Mines and Technology, located in the western region of Ghana. During the two-week trip, the seven students conducted fieldwork to gain an understanding of the effects of the Bui Dam on the local community. The group mainly shared rooms in rural guesthouses for the duration of their stay.

“It was fun to watch the students dive into the project and get to know each other. They are truly an amazing group of people who exceeded my expectations on how well they worked together as individuals,” said Hausermann. 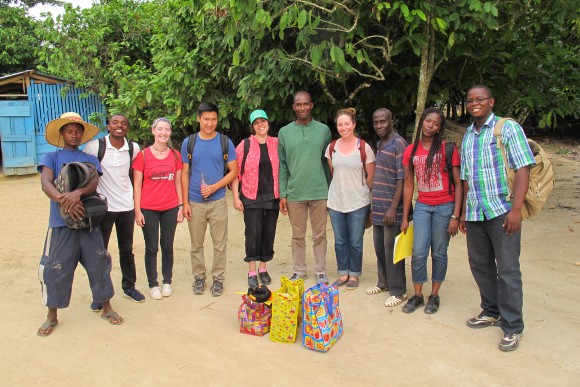 The team of Ghanaian and American students who headed into the field to conduct interviews with local Ghanaian residents.

The Bui Dam is a 400-megawatt hydroelectric project in Ghana built on the Black Volta River. Where the dam was built, an area of 440,000 sq. km was flooded, and thousands of residents lost subsistence farmland. As a result, there have been major agricultural losses and dietary shifts within local households.

“In terms of flooding, it was striking to see how dramatically the flooding changed the landscape. Most of the flooded land was in Bui National Park, and you could see husks of drowned trees sticking out from the water,” said Chang.

By interviewing locals, Chang and the other students were able to learn exactly how residents of nearby communities were affected by the flooding. Farmers reported a huge loss of farmland and were given new lots of land by the Bui Power Authority (BPA). However, the allotted new spaces were smaller and less fertile than the farmers’ original land, leading to large agricultural losses and dietary shifts. Yam, maize and cassava were once major sources of nutrition for locals, but are now diminishing in existence.

The controversial Bui Dam also greatly impacted  fishing in the area and local families are eating less fish than they did three years ago, before the dam was completed.

“In the resettled communities that were located downstream of the dam, the relocated fisherman reported significant losses in livelihood, due to the smaller size and quantity of fish that were able to pass the dam, and the difficulty in accessing the larger amounts of fish contained in the reservoir upstream,” said Chang. 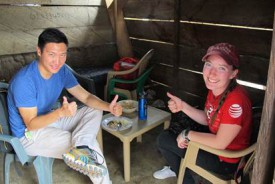 Simply put, what was once a river full of fish is now a reservoir that locals do not have the technology or knowledge to utilize. While locals are suffering and eating less fish than ever before, a new fishing market emerged seemingly overnight after the reservoir flooding was completed, according to Hausermann. Professional fisherman from other communities in Ghana, and even neighboring countries, are arriving with boats to take advantage of this new resource.

A particular group who is benefiting from the new landscape of Ghana are local petty traders, said Chang. There is an influx of outsiders and increased traffic due to a new road that was constructed by the BPA. Along the new road in the resettled community are water taps, new schools, community centers and health clinics. However, these life necessities were not fulfilled for the surrounding communities.

Hausermann, Chang and Mansell will be collaborating on a paper based on their research data collected in Ghana. Chang will be presenting his work at the Robert Wood Johnson Global Health Fair.