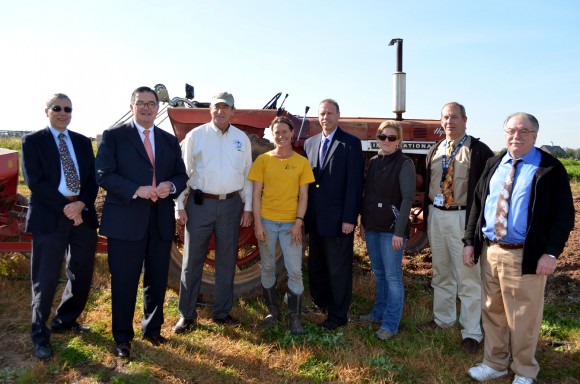 Jessica Niederer, a Hopewell Township organic produce and flower farmer, has been chosen as New Jersey’s 2016 Outstanding Young Farmer by the New Jersey State Board of Agriculture. Niederer will be presented with her award at the February 2016 New Jersey State Agricultural Convention in Atlantic City.

In 2015, Niederer became a member of the Rutgers New Jersey Agricultural Experiment Station (NJAES) Board of Managers, representing Mercer County Board of Agriculture. Niederer has deeper connections with Rutgers NJAES as she is a graduate of Annie’s Project New Jersey, a risk management educational program for women farmers run by Rutgers NJAES. Annie’s Project New Jersey co-leader Robin Brumfield, said “Not only does Jess do a great job on her own certified organic Chickadee Creek Farm, but she extends her knowledge to others and serves as a member of the NJAES Board of Managers and is one of three farmers so far who have agreed to serve on the new Ultra-Niche Crops advisory council, a project funded by the USDA and lead by Rutgers NJAES Agricultural Agent Jenny Carleo.” In addition, many Rutgers personnel on the Cook campus are familiar with Chickadee Creek Farm, which is the only organic fresh produce vendor at the weekly Rutgers Gardens Farmers Market.

The following was adapted from New Jersey Department of Agriculture press release:

Niederer grew up on her parents’ farm where her father produced soybeans, wheat, straw and her mother ran an eight-stall horse boarding operation. She graduated from Cornell University with a degree in Natural Resources. During her time as a student she traveled throughout the United States and Latin America for her studies. After graduation, she spent two years on a 60-acre organic vegetable farm, first as a greenhouse manager and later as assistant field manager. Finally, Jess came home to become the 13th generation of Niederer farmers.

“My parents never pointed me in the direction of farming; it was more common to hear them suggest becoming a lawyer or doctor,” said Niederer. “After graduating from Cornell, I realized my heart was in farming. I was 25 when I began my own agricultural operation, Chickadee Creek Farm.”

After coming back to Hopewell Township in 2010, Niederer leased five acres of land from the family farm for Chickadee Creek Farm on which she started growing her produce on two of the acres. Since then, she has increased production to 17 acres, sells through Community Supported Agriculture, attends five farmers markets and has become a certified organic grower.

As well as being a dedicated farmer, Niederer enjoys giving back to the community. In 2014 she was voted the “Local Hero” by Edible Jersey readers in the Farm/ Farmer category. To add to her community accomplishments, Niederer also is an active member of the Mercer County Board of Agriculture, teaches classes on organic farming through the Northeast Organic Farming Association of New Jersey and volunteers as an EMT during the slower months. 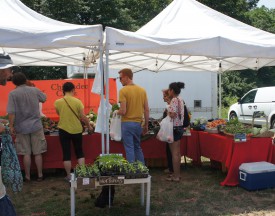 Chickadee Creek Farm is a vendor at the weekly Rutgers Gardens Farm Market.

New Jersey annually recognizes the outstanding achievements of a young farmer who is an upstanding leader, respected agriculturalist and is active in community or faith organizations.

New Jersey Secretary of Agriculture Douglas H. Fisher said “Jess Niederer is a hard-working, creative farmer who always is willing to help others interested in learning about farming. She is carrying on her family’s proud agricultural tradition and setting the example for both those new to farming and those with farming backgrounds to help keep New Jersey agriculture alive into the future.”

The OYF program is the oldest farmer recognition program in the United States, with the first group of national winners selected in 1955. The goals of the OYF program are to foster better urban-rural relations through the understanding of farmers’ challenges, as well as the appreciation of their contributions and achievements; to bring about a greater interest in farmers/ranchers; and to help build an urban awareness of the farmers’ importance and impact on America’s economy. The OYF program encourages a greater interest in agriculture through the appreciation of the farmers’ contributions and achievements and recognizes local citizens’ contributions and encourages better urban-rural relations. The National OYF program is sponsored by Deere & Company, supported by the U.S. Junior Chamber of Commerce and the National Association of County Agriculture Agents (NACAA), and is administered by the Outstanding Farmers of America (OFA) Fraternity.