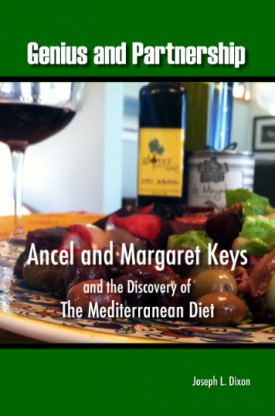 Joseph Dixon, associate professor in the Department of Nutritional Sciences, has self-published a new book, Genius and Partnership: Ancel and Margaret Keys and the Discovery of the Mediterranean Diet.

The book centers on physiologist Ancel Keys and his wife and co-researcher Margaret Keys, a biochemist, as they scour the world for clues to the causes of heart attacks that were killing American men at an alarming rate in the 1950s. Their journey leads to the start of the groundbreaking Seven Countries Study and contributions to the discovery of low-density lipoprotein (LDL). It also led to their writing three New York Times best-selling cookbooks that promoted the health benefits of the Mediterranean Diet.

In the course of their travels and research across the globe, Ancel and Margaret Keys pioneered and advocated the Mediterranean diet and wrote about it in their masterpiece cookbook and health guide, How to Eat Well and Stay Well the Mediterranean Way.

Dixon, a faculty member at Rutgers since 2004, researches lipoprotein metabolism, lipid metabolism in diabetes and obesity, and the role of lipids in the development of coronary arteriosclerosis. Since spring 2014, he’s published How to Cure Obesity, a blog for his courses on obesity, and nutrition and health.

For more on his new book, visit http://josephldixon.com.