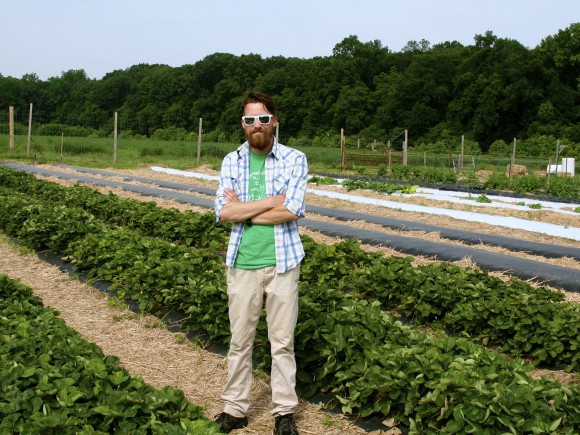 Jake Makely in the strawberry fields at the EARTH Center of Middlesex County.

A desire to connect local growers with producers was the driving force behind Jake Makely’s (SEBS ’16) idea to combine two of New Jersey’s favorite warm weather delights, strawberries and beer.

Makely, an agriculture and food systems major, has been a student intern in Applied Analysis of Successful Agricultural Enterprises since February 2014, which has provided him with first-hand experience in working with the Rutgers Scarlet Strawberry (RSS) at the EARTH Center of Middlesex County. The internship, run by Professor and Agricultural Agent Bill Hlubik, truly allows students to pursue their individual aspirations in the “field.”

A series of blind RSS taste-tests were conducted at SEBS professor Beverly Tepper’s Sensory Evaluation Laboratory (SEL) on George H. Cook Campus. Makely, along with other students in the program, picked and cut up pounds of the RSS for the taste tests and delivered them to the lab. Participants were able to comment on the sweetness, acidity, overall flavor, firmness and aroma of four varieties of the strawberry, and the results were overwhelmingly positive.

The wheels in Makely’s head started spinning when he received an email from his second job at Carton Brewing Company in Atlantic Highlands, NJ, about a new device coming to the brewery. The brewery was going to begin using a Randall, which is a double-chamber filter that can be connected to a tap of beer and filled with flavor-enhancing ingredients.

“I kept talking to my co-workers at the Carton Brewing Company about the idea of using Rutgers Scarlet Strawberries in the Randall, but people didn’t take it as seriously as I wanted them to. Then I spoke to Bill (Hlubik) and he was excited about it – and I knew it was a great idea,” said Makely.

“The students in my class are incredible and I genuinely value their feedback. I encourage them to keep a notebook handy while in the field to note trends in crops,” said Hlubik.

Makely proceeded to cut and clean two pounds of strawberries, got ahold of the Randall and created food-science magic. The Carton Brewing Company debuted the Rutgers Scarlet Strawberry-infused beer for a taste test to customers in June and plans to brew more over the next year due to the popularity of the flavor, according to NJ.com.

The RSS, boasting a distinctively delectable flavor, was developed to be grown and consumed in New Jersey, compared to California strawberries or traditional varieties shipped for hundreds of miles to get here. Getting to witness the adoration for locally grown produce first-hand, Makely’s agricultural aspirations became increasingly clear to him.

“There is a demand for local produce in New Jersey that is not being met. I hope to develop ways to fix the disconnect between supply and demand. Locals need to be able to get fresh food faster,” said Makely.