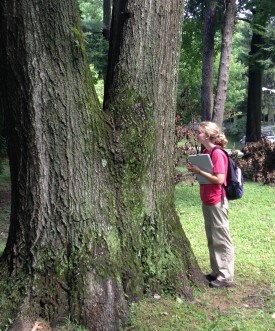 “The mosses were just labelled Moss 1, Moss 2, that it just struck me how much mosses are overlooked,” says Eliana Geretz, ecology, evolution and natural resources major.

At the time, she was helping conduct research in Hutcheson Memorial Forest in nearby Somerset County. One of the last uncut forests in the Mid-Atlantic States, the tract is administered and protected by Rutgers Department of Ecology, Evolution and Natural Resources. It appears on the National Park Service Register of Natural Landmarks.

She describes how she felt seeing all the other plant samples were properly named and indexed, while the mosses seemed so unnamed and unclassified, due to the difficulty in identifying them.

Geretz’s attention was so taken by this that she chose to focus her George H. Cook honors thesis on studying tree moss. “Partly it’s how whimsical they seemed to me,” she explains.

According to Myla Aronson, research scientist in the Department of Ecology, Evolution and Natural Resources, and Geretz’s honors research mentor, “There is a long history of botanical collections in the city of Philadelphia.” 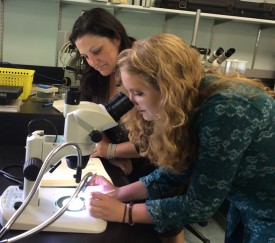 This treasure trove of historical analysis was very useful for Geretz’s research study, which was trying to answer the big question of how moss diversity changed with urbanization. Geretz did this in two ways: by looking at historic flora over 200 years and by conducting a current survey along the urban-to-suburban gradient.

Her findings, which she documented in her honors thesis, “Temporal and spatial changes in bryophyte diversity with urbanization in Philadelphia, PA,” showed that moss diversity did decrease with urbanization, and specifically that the number of moss species was lower in the urban parks in Center City.

Was she surprised at these findings? Essentially, no.

As Geretz explains, “mosses are epiphytic,” i.e., they grow on trees. “They don’t have roots, so they absorb their nutrients from the air.”

And “in addition, mosses have really thin leaves, so they’re more susceptible to air pollution, which is prevalent in more densely urban landscapes,” she explains.

Her work on this “overlooked” flora is leading to quite a bit of attention for Geretz, whose G. H. Cook Honors research thesis was an important component in her being recognized with the Young Botanist Award from the Botanical Society of America. This award, which offers individual recognition to outstanding graduating seniors in the plant sciences, was only given to 18 undergraduates in the U.S. this year. She will be presented the Young Botanist Award at the SEBS Baccalaureate ceremony on the George H. Cook campus on May 15. 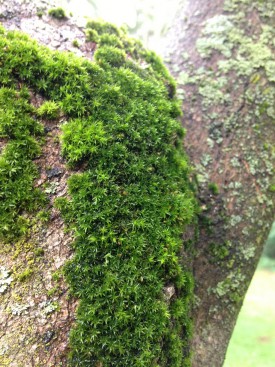 After graduation, she plans to continue her research in Hutcheson Memorial Forest with Aronson this summer. She’s also hoping to gain more research experience before applying to graduate school “for something plant ecology-related.”

Maybe there is more moss is in her future.