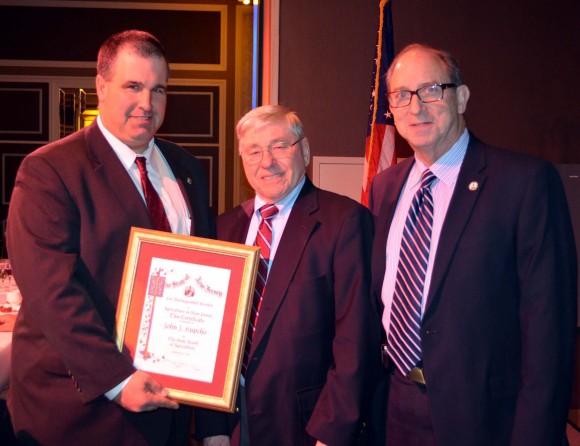 “Jack Kupcho changed the way farmers do business in New Jersey, helping to guide the industry toward direct marketing and high value crops,” said New Jersey Secretary of Agriculture Douglas H. Fisher. “The state agriculture industry owes a lot to Jack. He has been an innovator who has inspired younger agriculture agents as well as farmers.”

Jack Kupcho (GSNB – Soils and Crops ’74) earned a Bachelor of Science Degree in Ornamental Horticulture from the University of Tennessee. He received his Master of Science in Environmental Science and Urban Planning from Rutgers University. He currently holds the title of Professor Emeritus at Rutgers.

Kupcho began his career as the Essex County Agricultural Agent at Rutgers Cooperative Extension in 1963. He assisted commercial vegetable growers in Bergen, Essex, Morris and Passaic counties in changes to their production methods to maximize resources. He introduced use of clear plastic as a soil heating mulch resulting in higher, earlier and more quality yields of early sweet corn, cucumbers, squash and eggplant. He encouraged production of high value crops on small land areas, including greenhouse tomato growing. He urged growers to trial test new soil-less mixes, which resulted in growers adopting the use of the lighter peatlite mix, resulting in lower cost of production, more uniformity, higher quality, and less bulk handling. At the time, commercial vegetable growers were using little or no herbicides. Kupcho presented growers with results of current research which led to widespread and proper use of these chemicals, helping to cut labor costs. He also guided growers to shift from selling solely wholesale to opening roadside markets, increasing their produce sales by 50 to 100 percent.

As Chairman of the Department of Agricultural and Resource Management Agents at Rutgers’ Cook College, Kupcho developed the Master Gardener Program for Northeastern New Jersey. He organized leaf composting and ground water education programs for community leaders. He made changes in the Newark Urban Gardening Program to increase the efficiency and provide a more effective educational delivery system for the federally and state-funded urban project. Under his direction, in 1988 this program was chosen for the Take Pride in America Award. Kupcho accepted the award from then-president Ronald Reagan at a ceremony on the White House lawn.

As department chair, he was responsible for providing program leadership and staff development for 57 agents and program associates in 20 New Jersey counties. During his tenure, he hired 21 new agents located in both critical agricultural and urban areas of the state.

Since 1932, the New Jersey State Board of Agriculture has awarded the prestigious Citation for Distinguished Service to Agriculture to men and women who have given unselfishly of their time and talents to the advancement and betterment of the agricultural industry and rural life in New Jersey. This award is given to recognize and honor those individuals who have made outstanding contributions of public service to New Jersey agriculture.