Managers, educators, and oyster farmers gathered at Cape May’s Grand Hotel late last month for a special session, “Shellfish Culture Now and Tomorrow: Charting a Course for Delaware Estuary Aquaculture,” held in conjunction with the Delaware Estuary Science and Environmental Summit. The Partnership for the Delaware Estuary has hosted the summit every two years since 2005 and it has become as important conference for a variety of stakeholders whose work focuses on the estuary.

The panelists focused on the current status of aquaculture and restoration efforts in the Delaware estuary, and more importantly, how those efforts can grow and change in the near future. They noted that while the aquaculture industry in Delaware Bay is small in comparison to neighboring states, this baywide industry is poised to expand, both in scale of production and species being produced. 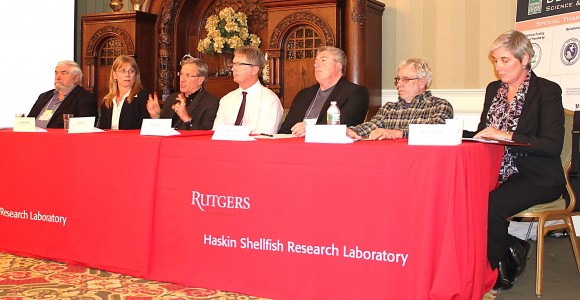 From a global perspective aquaculture production has been expanding and now accounts for half the world’s food fish and shellfish production. In addition to serving global food needs, aquaculture can also serve to maintain coastal ecosystem functioning and resilience. Bivalves are an ideal crop animal because they feed on wild natural algae and are key ecosystem engineers. Their ecological role as hard substrate filter-feeders provides positive benefits to coastal systems threatened by sea level rise, eutrophication and shoreline erosion.

According to Munroe, more than ever today, the Delaware Bay industry is faced with key challenges in regulatory reform, user group interactions, and research and development, all issues that will open the door for building into the future. Likewise, shellfish restoration has become a major opportunity that has been brought to the table as a means to mitigate climate change and sea level rise.

As both farming and restoration efforts move forward in Delaware Bay, informed discussion is critical to insure development of both, added Monroe. “This panel discussion was a good first step in beginning the conversation about how best to support science and research standpoint the development and growth in both sectors.” Read news article in the Cape May County Herald.