The following is a tribute to Karl Maramorosch, Robert L. Starkey emeritus distinguished professor in the Waksman Institute of Microbiology at Rutgers and emeritus professor in the Department of Entomology of the School of Environmental and Biological Sciences, by SEBS Executive Dean Bob Goodman on the occasion of Maramorosch’s 100th birthday on January 16, 2015. Maramrosch passed away on May 9, 2016 at the age of 101. 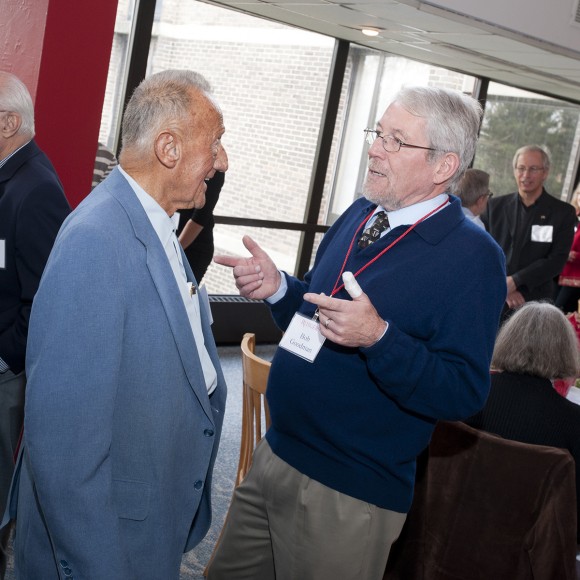 Few of us will be fortunate enough to pass the century mark in our lives, not to mention reaching 100 years of age and still being an active, productive scholar, lecturer, world traveler and mentor. For Karl Maramorosch, that fortunate milestone is just a small piece of what he would call a very lucky life, indeed.

Among the countless prizes and honors Karl has received during his career, he understandably is proudest of the Wolf Prize in Agriculture, bestowed upon him in 1980 by the Wolf Foundation in Israel. This honor is widely considered the Nobel Prize of agriculture, and Karl was cited “for his pioneering and wide-ranging studies on interactions between insects and disease agents in plants.”

Karl’s Wikipedia profile describes him as a virologist, entomologist and plant pathologist. That doesn’t begin to sketch a life that easily could have become a major motion picture. To get an idea of this remarkable man, one needs only to read Karl’s memoir (starting at page 90). Here are some of the revelations:

“When the suggestion was made to write my biographical chapter for Advances in Virus Research, I did not know how difficult a task that would be – where to start, what to say, what to omit? I decided to start with my childhood and describe events in my life that inspired me to become a virologist and that were responsible for my scientific career.”

He goes on to talk about his childhood, the political and geographical upheaval of the era around World War I, his well-educated Polish father and his Croatia-born mother who spoke five languages fluently and whose primary language was German. He and his siblings spoke only Polish with his father, and German with his mother. He thought all households operated this way.

When he was 14 years old, his brother – six years his senior and a medical student – came home for vacation and described in vivid detail how his biology professor had developed a vaccine for exanthematous typhus by infecting body lice with Rickettsia prowazekii and painstakingly processing them for just a single dose of vaccine. The description fascinated him and he vowed on the spot to become a medical researcher. 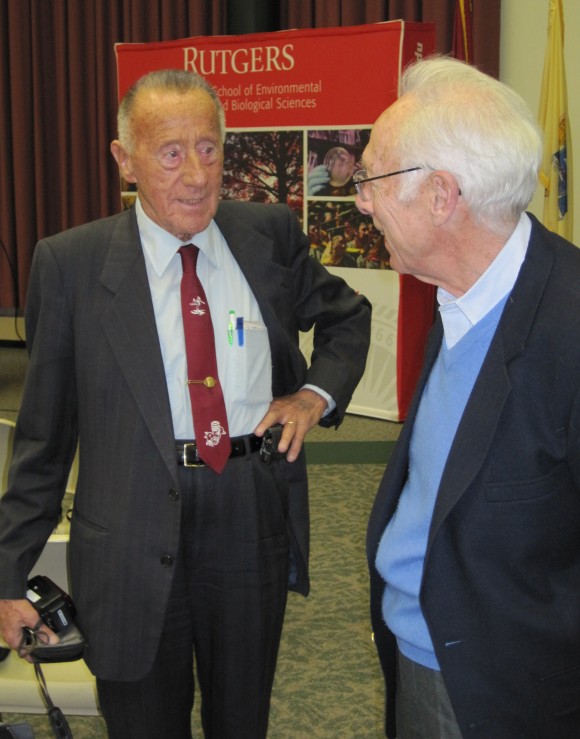 Karl Maramorosch, left, with the late Aaron Shatkin, founding director of the Center for Advanced Biotechnology and Medicine, at the 2010 Maramorosch Seminar sponsored by the Department of Entomology.

However, as luck would have it, his path turned to agriculture, and he received the degree of Agricultural Engineer from the Warsaw Agriculture University (SGGW). While there, on a field trip with 20 other Jewish agricultural students to the oldest Polish agricultural experiment station, his eyes met “the shiny black eyes” of a young woman passing by the group. He was dumbstruck by the encounter and a colleague, noticing, offered to introduce him to the lady, Irene Ludwinowska. Three years later, and after his graduation, they were married. Later, he would say that she was the first love of his life and for all the 70 years they were together until she died in 2009.

He believed that Irene brought him luck throughout his life, perhaps most dramatically when they escaped Poland following the Nazi incursion. She and Karl slipped into Romania with the help of a Polish army major who had stopped Irene to ask for directions to the only bridge in the area that would allow them to escape. On the other side, more luck: he and Irene were able to find shelter with the daughter of a wealthy landowner, who mistakenly thought they were relatives of her husband from Poland. They weren’t able to stay long, but they developed a lasting friendship with members of the family.

“We were lucky,” Karl wrote, “having survived the holocaust in refugee camps in Romania, but my parents and my brother perished, as did my wife’s parents, her sister, and 127 closest relatives.”

Karl was issued a visa to the U.S. as a “skilled agriculturalist,” assisted by the U.S. agriculture attaché in Romania. While awaiting passage from Sweden to the U.S., he became acquainted with Swedish plant virologist Dr. Daniel Lihnell, who introduced him to that field and prompted Karl to decide that virology would be his chosen field in America.

Arriving in New York, Karl got a job as a technician with the Brooklyn Botanic Garden and Irene at the New York Public Library, where she thrived for 30 years. While finishing his Ph.D. studies at Columbia University (encouraged by his Botanic Garden boss, Dr. Lindsay Black,) he was introduced to Dr. L.O. Kunkel of the Rockefeller Institute for Medical Research. Later he joined Kunkel in the Department of Plant Pathology at what later became Rockefeller University.

His career flourished. He has done work at Cold Spring Harbor, Boyce Thompson Institute, and eventually joined Rutgers University as a member of the Waksman Institute of Microbiology. Upon retirement, he was encouraged to join the Department of Entomology, where – when he wasn’t attending conferences and presenting papers around the world – he spent three days a week on campus, commuting from his home in Scarsdale. [An accomplished pianist who once considered a career as a classical pianist, his memoir includes a photo of himself and his beloved Irene sitting at their piano in his Westchester home.]

The story wouldn’t be complete if I did not share this passage from his memoir – a quote written around 2007 from the time he was working on insect pathology that makes me exceptionally proud:

“The etiology of the whitefly-borne pathogens remained an enigma for many years. Repeated attempts made in my and in other laboratories to find viruses in extracts of diseased plants or by electron microscopy in thin sections of plant tissues were fruitless. Finally in 1975, Professor Robert M. Goodman at the Plant Pathology Department of the University of Illinois in Urbana made the brilliant discovery of the whitefly-borne Gemini viruses and of the single-stranded DNA genome. Professor Goodman left Urbana for the University of Wisconsin in Madison and others continued his work on Gemini viruses. I was very happy when he came to Rutgers University two years ago, becoming my Executive Dean.”

For me too it was an honor and privilege to end up as Karl’s dean.

I was an undergraduate working in a nematology lab at Cornell in 1966 when I first met Karl; he has a career-long history of helping young scientists get started and finding their “writer’s voice” through opportunities to contribute to the books and monographs that he edited. I was extremely fortunate to be one of those “youngsters” in whom Karl took an early interest. My career would not have been what it has been were it not for Karl’s attention, sponsorship and friendship. 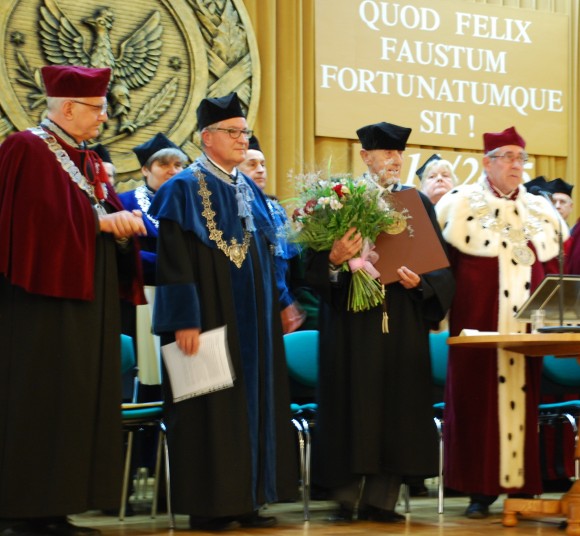 In addition to the Wolf Prize, he has won numerous other awards and honors, including the Jurzykowski Award in Biology, AIBS Award of Distinction, the Waksman Award, AAAS Campbell Award, the 2012 SGGW Award of Distinction. He was nominated by the Entomological Society of America and the Phytopathological Society for the National Medal of Science. Among Karl’s latest significant awards is the Honoris Causa Doctorate from his alma mater, the Warsaw University of Life Sciences, which he received at a ceremony in Warsaw in October 2014.

He also has held short-term assignments from the Rockefeller Foundation, the Agency for International Development, U.S. Department of Agriculture, and Ford Foundation in Mexico, India, Kenya and the Philippines. He has edited more than 90 volumes on viruses, vectors, plant diseases, invertebrate cell culture, and is the author or co‐author of more than 800 research papers. His major interests include comparative virology, invertebrate cell culture, parasitology, diseases caused by spirochetes, viroids, phytoplasmas and spiroplasmas. He is an active participant in biotechnology studies and international scientific cooperation.