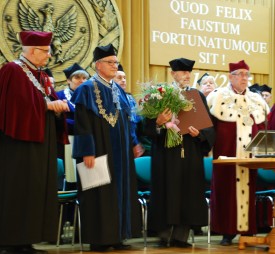 Karl Maramorosch, emeritus member of the Department of Entomology, was awarded the Honoris Causa Doctorate by his alma mater, the Warsaw University of Life Sciences, at a ceremony in Warsaw in October.

Over the course of a long and distinguished career spanning over six decades, Maramorosch has received numerous awards, including the prestigious Wolf Prize in agriculture for his pioneering and wide-ranging studies on interactions between insects and disease agents in plants in 1980.

In 2010, he received the “Professor M.V. Nayudu Lifetime Achievement Award” in memory of the founder and former head of the Department of Virology of the Sri Venkateswara University in Tirupati, India, where he was recognized as an “eminent American virologist, entomologist, and plant pathologist, and a world renowned plant virologist…who has served and moved through centuries in the field of plant virology, with distinction and dedication, for the last 63 years.”

An annual lecture series, named for Professor Maramorosch in recognition of his exceptional contributions and achievements, presents cutting-edge research in the field of entomology and is hosted by the Department of Entomology at the Rutgers School of Environmental and Biological Sciences.