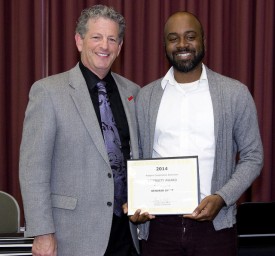 The purpose of the Rutgers Cooperative Extension Awards for Diversity is to recognize outstanding efforts and accomplishments in achieving and sustaining diversity in Extension organizations, programs, and audiences. The two recipients for the Diversity Awards for 2014 are Kendrin Dyitt, Atlantic County 4-H urban program associate in the 4-H Youth Development Department and Amy Rowe, environmental and resource management agent, RCE Essex and Passaic Counties from the Agricultural and Resource Management Agents Department.

Kendrin Dyitt demonstrates his commitment to diversity working closely with youth, residents, and groups regardless of their demographics with energy, enthusiasm, and effectiveness. He has developed several partnerships and relationships within the at-risk communities of Atlantic City and Pleasantville. His programming has continued and grown. He engages and empowers community members to have a more active role in their learning process and determining their future. He truly exemplifies diversity as a means of working with others that respects and includes differences, recognizing the unique contributions that individuals with many types of differences can make, and creating an environment that maximizes the potential of all. He is a positive male role model for many young people and staff of other organizations. 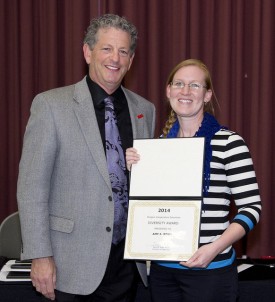 Amy Rowe has provided superior service to U.S. military veterans. Her green job skills training courses have focused on an underserved audience and her classes are predominantly comprised of minorities. Her programming for veterans has garnered attention at the state, regional, and national levels and was recognized by the Governor’s Environmental Excellence Award in 2011. The stormwater management plan of the East Orange Veterans Affairs (VA) Hospital educational program provided job training for veterans and contributed to the administration’s goal of becoming a more “green” and sustainable facility while also contributing to onsite storm water management. The curriculum for this program was adapted and expanded from the Rutgers Master Gardener educational materials. The veterans learned green job skills while serving as a workforce for preventing stormwater damage and beautifying the hospital grounds.

This work has reached a new audience, as 96% of the training participants had not previously attended an extension programming event prior to enrolling in these veterans-only training courses.