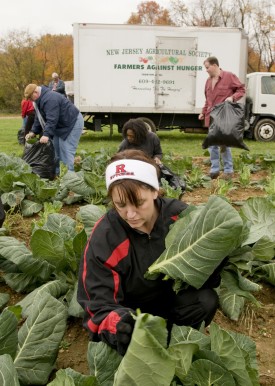 What happens to the farm produce that doesn’t make the grade? One use is to supply local food banks by “gleaning” the produce left in the field.

August “Augie” Wuillermin, co-owner/operator with his brother, Ed Jr., of Ed Wuillermin & Sons Farm in Hammonton, NJ, turned in disgust and grumbled, “Some days I just have to stay out [of the packing house] when the peppers come in this way. It’s sickening. Seems like such a waste!”

Is waste an opportunity lost?

Economists talk about ‘opportunity cost’, loosely defined as the value of something that must be given up in order to do something else. Every resource has alternative uses, so every choice has opportunity cost(s).

Waste comes into play when the investment of time, energy and labor does not create the intended outcome and the alternatives do little to cover those costs. Hence, from grower to consumer, technologies and practices are employed to reduce potential losses as much as possible. Sorting machines fine tune the sizing and separating of defective produce. Packaging engineers design containers that maximize air flow to allow efficient cooling while maintaining strength to protect the fragile contents during storage and shipping.

The ‘waste’ in the fresh market produce chain comes from 1) shrinkage — losses due to wilting, bruising and trimming which leads to parts being removed and at the retail level, often thrown in the trash rather than composted/recycled (though this is changing) and 2) over-purchasing — leading to product spoiling before it can be consumed, at all levels — wholesale, retail, food service, and at home.

Throughout the fresh market produce chain, post-harvest scientists provide plastic films that selectively allow the natural oxygen, nitrogen, ethylene, carbon dioxide, water or sulfur levels to pass through or collect inside a container. This creates a modified atmosphere that can be controlled to reduce respiration rates and water loss, as well as inhibit fungal or bacterial growth, minimizing both shrinkage and spoilage. 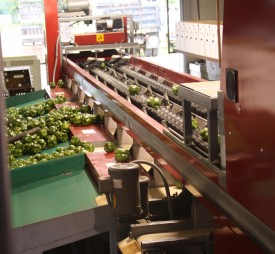 A computer analyzes video pictures of pepper fruit passing under a camera in the red box to the right and then triggers the conveyor further down the line to dump them in the correct group for size, shape and color. Blemished and misshapen peppers are separated from the fruit destined for fresh market.

The Wuillermin brothers have invested in a high tech grading machine which analyzes a video of each pepper as it rotates under the camera and then further down the line sorts the fruit by size, shape and color. Off-color, misshapen and blemished peppers are separated from the perfect fruit destined for the produce aisles across the region. Fine tuning the sorting process reduces the culls and can make fine distinctions helping ensure that the correct sizes go into the same boxes, increasing the efficiency of the workers making the final pack.

Augie was frustrated by the brown surface lesions we call edema (or oedema) on otherwise perfect looking, and perfectly edible, bell peppers rapidly filling a bin destined as seconds, or rejects, to be delivered for a much lower price to a local food processor. 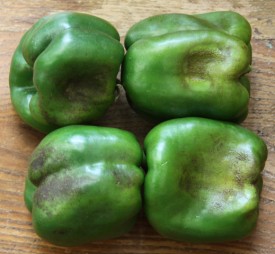 Though perfectly edible, you will rarely find oedema blemishes on peppers in the produce aisle because they don’t make the grade, but they are not wasted. Instead they are sent to a processor for chopping and freezing.

It’s of little solace, of course, if the grading-sorting machine picks out more blemished fruit than anticipated, but having processors able to take those seconds can be the difference between profit and loss, both for individual farms and the entire industry. For example, New Jersey was once a leading producer of sweetpotatoes. As sweetpotato canners moved south to the Carolinas, growers like Augie and his brother had no home for ‘B’ grade roots. The Wuillermins, and many others, gave up on sweetpotatoes because the only alternative market that has helped a few Jersey growers survive has been to sell those culls to hunters for deer bait.

However, just as ‘beauty is in the eye of the beholder’, ‘one person’s trash is another’s treasure.’ Less than a week after visiting the Wuillermin farm, the produce industry trade papers were abuzz with a new product launch by a California grower-shipper. Baloian Farms of Fresno began shipping pre-packed 1-pound bags of misshapen red and green bell peppers cleverly named “Odd-bells.” Some of the same conditions that contribute to edema (crowding of fruit on the plant) also cause up to 30% of the crop to grow into something less than the 4-lobed blocky fruit sought by supermarket produce managers. Prepackaging in a colorful bag and offering a discount over those number one fruit gives consumers a choice as well as a feeling of getting a bit of a bargain and helping to reduce waste at the same time. 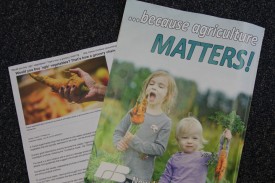 Don’t tell these toddlers that their carrots are ‘ugly’. Their parents likely expected them to grow just like that to send for processing rather than fresh market, but they taste great fresh too!

That concept also got some more press this summer when the French grocery ‘Intermarché’ began promoting Inglorious (i.e. ugly) fruits and vegetables at a 30% discount, and they were selling out. It’s funny that the carrot in the photo illustrating the blog post Would you buy ‘ugly’ vegetables? That’s how a grocery chain fights waste looks like they found the same carrot proudly displayed and ready to be eaten by a couple of excited toddlers in an (unrelated) ad on the back cover of the 2014 edition of New Jersey Agriculture – Growing Great in the Garden State.

What’s the difference? It depends on your point of view. Those crops were never ‘wasted’ from the farmers’ point of view. As a matter of fact, the farmer likely expected those carrots, in both photos, to look that way because they were grown for processing, not fresh market. Processors don’t require perfect produce, thank goodness, and they have always provided a home for off-grade produce for preserving or turning into value-added products. Also, unsold, or unmarketable but otherwise edible, crops are often donated or offered to gleaning programs to stock food banks and feeding pantries – usually without much hoopla or publicity. Anything left beyond that is recycled, composted and turned back into the ground from where it came.

On the other hand, don’t tell Joe Procacci of Philadelphia that ‘ugly’ should be discounted. He developed the UglyRipe® Heirloom-Type Tomato to look and “taste like a hearty, beefsteak tomato is supposed to.” As one of the country’s largest growers and shippers of all types of tomatoes from their farms in Florida and New Jersey, ironically, Procacci Brothers had to battle the Florida Tomato Commission to be able to ship UglyRipes out of state. The UglyRipe was selected specifically because it looks like a big, multi-lobed garden variety beefsteak many consumers associate with flavor, rather than the uniform, round standards to which all other growers had to abide. More clever marketing, and in this case, UglyRipes usually sell for a premium! 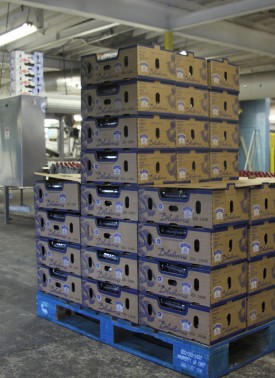 There’s a science to engineering a carton strong enough to stack many layers high and with enough openings to allow cold air to flow through the stack to keep this stack of fragile Jersey blueberries cold, but not crushed.

Today’s consumers have become accustomed to supermarket produce aisles overflowing with perfectly uniform, unblemished fruits and vegetables. ‘Ugly’ produce has become such a novel idea for many shoppers they can be easily convinced that they’re both getting a deal and reducing waste. At the same time that the French grocer was getting the coverage among food bloggers for trying to reduce waste by giving shoppers a bargain on off-grade discounted produce, others were blogging about using technologies to help reduce bruising and internal discoloring of potatoes, or increasing shelf life with packaging technologies that reduce spoilage in packing, shipping and storage.

The bloggers seemed amazed, stating, “It turns out, consumers will buy ugly fruits and vegetables when they’re 30 percent less expensive than the perfect-looking ones that are right next to them.” What’s more amazing is that it’s typical in most retail produce departments to mark up produce 100% over cost, whether that’s for number one products or off-grade products. A 30% discount on less than perfect produce is still a 100% mark-up for the grocer.

As the days are getting noticeably shorter and it’s cooling down a bit, our summer crops start to slow down too, producing smaller and more off-grade picks than premium number ones. Traditionally, many consumers would wait until this time of year to find bargains on field run or off-grade produce to can or freeze. If you want a real deal, go to a local farm/farmers’ market and buy direct. One-hundred percent will go to the grower, whether it’s a premium product or a second-grader, and what isn’t sold at the end of its life will really be recycled, not wasted. You can’t beat the deals on tomatoes, peppers, late season peaches, or field-run apples – still Jersey Fresh but maybe just not as pretty as what’s sent to stock the supermarket produce aisles.