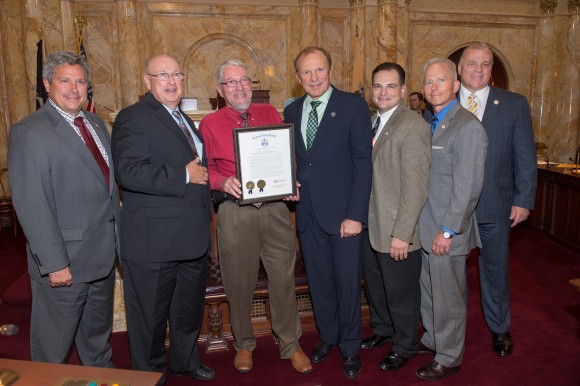 The New Jersey Legislature commemorated the 150th anniversary of Rutgers’ designation as the land-grant institution for the state of New Jersey by passing a joint resolution in the Senate on Sept. 22.

In 1862, Congress passed the Land-Grant College Act, a landmark statute also known as the Morrill Act, which established a system of land-grant colleges in each state to train students in the mechanical arts and agriculture. In 1864, the New Jersey Legislature designated Rutgers College the land-grant institution for New Jersey following the efforts of two Rutgers College professors to have Rutgers named the state’s land-grant college, prevailing over Princeton and the State Normal School in Trenton.

Robert M. Goodman, executive dean of the Rutgers School of Environmental and Biological Sciences, appeared on the Senate floor to accept the resolution on behalf of the university. He thanked the New Jersey Legislature “for this remarkable honor, which recognizes the important role of Rutgers, as the state university of New Jersey, and the School of Environmental and Biological Sciences.” 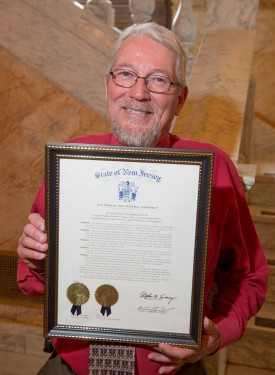 Dean Robert M. Goodman holds the joint legislative resolution that honors Rutgers on the 150th anniversary of its designation as the state’s land-grant institution.

“By passing this resolution, the state Legislature has acknowledged the significance of an anniversary that, 150 years ago, led to Rutgers’ emergence as a modern institution of higher learning and an outstanding record of service to the residents of New Jersey.”

Today, Rutgers is New Jersey’s sole land-grant university and is one of more than 100 land-grant institutions serving the nation, thanks to the Morrill Act, widely considered one of the most transformative congressional statutes as it laid the foundation for comprehensive public institutions of higher education in the U.S.

The lead Senate sponsor of the joint resolution was Sen. Bob Smith (D-17) and his Assembly district colleagues Joseph Egan (D-17) and Upendra Chivukula (D-17). The 17th legislative district, which encompasses several municipalities in Middlesex and Somerset counties, includes the cities of New Brunswick and Piscataway, which house the Rutgers-New Brunswick campus. 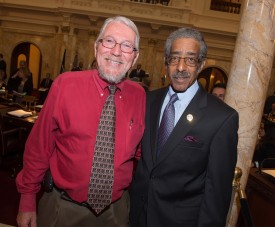 Rutgers gained land-grant status in 1864 after Rutgers College professors George H. Cook and David Murray successfully lobbied the New Jersey Legislature to have the college designated the land-grant institution of New Jersey. Their efforts led to the creation of the Rutgers Scientific School, which had its beginnings on a 98-acre property on the outskirts of New Brunswick that served as the school’s experimental farm. That land is now the heart of the George H. Cook campus of the Rutgers School of Environmental and Biological Sciences in the Rutgers–New Brunswick.