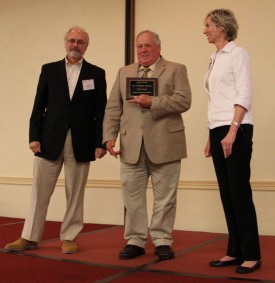 William Meyer, professor in the Department of Plant Biology and Pathology and director of the Rutgers Turfgrass Breeding Project, was awarded the 2014 National Association of Plant Breeders (NAPB) Impact Award at the association’s annual meeting held in Minneapolis, MN, on August 8.  According to the NAPB, its Impact Award “recognizes an individual active in the plant breeding field that has shown exceptional accomplishments in their research, teaching and collaborations with others.”

In addition to the NAPB Impact Award, Meyer has received many accolades, including the New Jersey Turfgrass Association Hall of Fame Award in 2009 and the Golf Course Superintendent’s Association John Morley Service Award in 2006.

As part of the NAPB IMPACT award, Meyer was interviewed at the association’s meeting by Shawn Brook, publisher of Seed Word magazine.