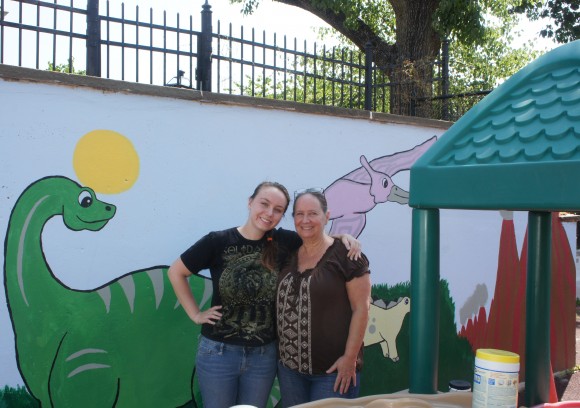 Jaclyn Daddio (l), with her mother Susan, in front of the newly renovated mural at the Rutgers Nutritional Sciences Preschool.

How much of our early childhood do we remember? How much exposure from when we were three or four years old do we carry with us into adulthood? For the Daddio family of South River, NJ, who sent all three of their children to the Rutgers Nutritional Sciences Preschool at the School of Environmental and Biological Sciences, it appears that their attendance forged a link that stayed with them years later.

Rachel Daddio, a Nutritional Sciences major (SEBS 2015) returned to her preschool alma mater as part of her coursework, only this time, instead of as a child being observed in front of the observation booth, Rachel was on the other side of the glass. As part of founding director Harriet Worobey’s Nutrition and the Developing Child course, Rachel’s laboratory coursework at the preschool involves creating a snack and conducting nutrition education with the preschoolers, in addition to a journal and case study on one of the preschool students.

Despite the fact that over 16 years have passed since Rachel was a preschooler, the memory of her and her siblings’ time there has remained strong. On the playground, one panel of the surrounding wall had been painted with a big green dinosaur with red sneakers. That wall was dedicated to Danny, a four year old preschooler who loved dinosaurs but tragically died from drowning. The years had taken a toll on the mural which was peeling and chipping. Worobey and Rachel discussed the need for Danny’s wall to be renovated. Rachel knew just what to do and called her sister Jaclyn (SAS 2015), an Evolutionary Anthropology major, with a minor in Art. 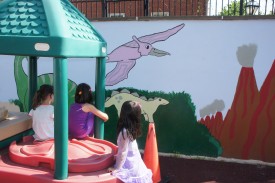 Children attending the daycare housed at the Nutritional Sciences Preschool facility admire the new mural on the playground.

Jaclyn agreed to paint the wall and yet another family member stepped up to the plate, their dad Ralph who is a mason sanded down the wall, providing a fresh canvas for Jaclyn’s new mural. With Worobey’s blessing and a handful of paint colors which she mixed to expand her color range, Jaclyn recreated the mural with four types of dinosaurs and a blue sky and vegetation as backdrop.

Jaclyn had been a classmate of Danny’s. His love of dinosaurs had become ingrained in Jaclyn and a few years later she declared she wanted to become a paleontologist. While many early childhood aspirations change over the years, Jaclyn’s never wavered and she carried her link from Rutgers Nutritional Sciences Preschool back to Rutgers when she enrolled as an Evolutionary Anthropology major.

Could it be a coincidence that her sister Rachel also carried that link by becoming a Nutritional Sciences major? Their mother, Susan isn’t sure. Accompanying Jaclyn on a bright summer day as she adds the finishing touches to the mural, Susan recollects how as a parent she was affected by the preschool. “It was a wonderful preschool”, says Susan, who had looked around before settling on Rutgers preschool as the best option for her kids. “They always offered lectures for the parents”, she recalls. She never felt pressured to attend the lectures, and she retains those lessons on healthy snacks and meals for the family. They stopped using processed convenience foods like “Lunchables” and started offering a platter with choices of fresh colorful foods, where the kids got to pick what they wanted. The kids named this family favorite “clopin”. 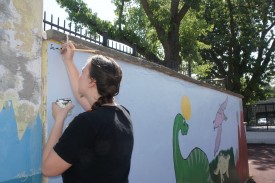 While the Rutgers Nutritional Sciences Preschool today remains the only preschool in the U.S. to focus on nutrition, it is clear that this unique early learning environment has nourished students and families in more ways than one.