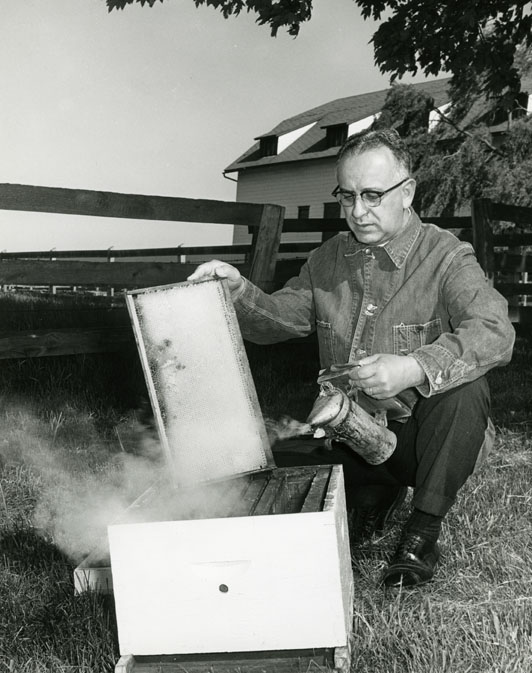 A first-generation American, Phillip Alampi was born in Philadelphia and grew up on a small farm in Williamstown, N.J., in Gloucester County. He graduated from Glassboro High School, where he was active in Future Farmers of America and 4-H. After graduating from Rutgers in 1934, he taught high school vocational education in Salem County for 10 years, and in 1945, he earned a master’s degree in Agricultural Education from Rutgers.

The following year, he became a farm broadcaster, and for the next decade he hosted popular radio and television shows, many of which were co-hosted and produced by his wife Ruth. His agricultural morning program was based in New York City at WJZ (now WABC) and then at WNBC and WNBC-TV. The programs made him a spokesman for the farming industry.

In 1956, he was named New Jersey’s Secretary of Agriculture, and his service until 1982 spanned administrations from Gov. Robert B. Meyner, a Democrat, to Gov. Thomas H. Kean, a Republican. Twenty-six years in office made him the longest-serving Cabinet officer in the state’s history. During his term, he successfully fought to preserve the state’s farmland and to market the state’s agricultural produce. His admirers called him “Mr. Garden State.”

After retiring in 1982, Alampi worked as a consultant on agriculture to corporations and public agencies. He served as president of 42 civic and professional organizations and earned 146 awards, including an honorary Doctor of Laws degree from Rutgers in 1969, during a commencement ceremony that also honored famed author and philanthropist Pearl S. Buck. That same year, his son James (Ag ’69) received his Bachelor of Science degree from Rutgers in Veterinary Medicine Specialties. Two other sons are David and Richard. The latter is executive director of the New Jersey Veterinary Medical Association.

Alampi also is a G.H. Cook Distinguished Alumnus and was an honoree of the Loyal Sons and Daughters, a recipient of a Scarlet Oak Meritorious Service award and a Rutgers Medal, and a member of Phi Beta Kappa, Cap and Skull and Alpha Zeta.

Phillip Alampi died in 1992 at the age of 80, and Ruth died in 2006. But the Alampi name lives on at the School of Environmental and Biological Sciences and in New Jersey.

There is the Alampi lecture hall in the Department of Marine and Coastal Sciences, an Alampi Scholarship for undergraduate students, the Phillip Alampi Beneficial Insect-Rearing Laboratory in Trenton, the annual Phillip Alampi Industry Marketing Award presented by the New Jersey Agricultural Society, and the new Phillip Alampi Memorial Cooperative Extension Fund to continue the Alampi legacy of helping NJ farmers.