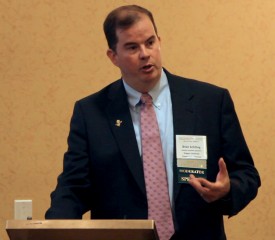 The oft seen bumper sticker “No Farmers, No Food,” conveys a clear message about the importance of farmers. But what about the farmland they – and we – depend on? Preserving farmland everywhere provides abundant local food supplies and many public benefits: ecological services, wildlife habitat, land and soil conservation and open space.

Nationwide, 28 states have programs in place, but not all are actively purchasing and preserving land, and other states without programs are only now realizing the need for preservation. And although 2.2 million acres of farmland have been preserved, there are still many challenges for new and continued preservation efforts, from lack of funding to shifting priorities.

That’s why, for the first time in seven years, a two-day national conference was held on May 12-13 in Hershey, PA. Saving America’s Farms and Farmland: Celebrating 40 Years of Farmland Preservation gave state, county, local, non-profit and academic farmland preservation practitioners the chance to share information, experiences and successes; to learn from well-established and well-subscribed programs; and an opportunity to network with like-minded professionals.

The event, attended by 125 representatives from 18 states ranging from Washington to Ohio to Maine, was a collaboration among Brian Schilling, extension specialist at Rutgers University, Deborah Bowers, Carroll County, MD preservation specialist and publisher of the nationally recognized Farmland Preservation Report, and the Farmland Preservation Roundtable Conference Steering Committee. Schilling’s current USDA-funded work on farmland preservation issues – focused, in part, on keeping the land affordable and accessible to farmers – partially funded the conference. 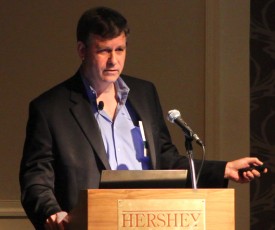 Tom Daniels, professor, city and regional planning, University of Pennsylvania was the keynote speaker at the conference.

Successes in New Jersey – and a Long Way to Go
Having felt the threat of urban encroachment and development far longer than other areas, the northeast has some of the most active and well-established preservation programs in the country. In fact, about a third of the 2.2 million acres preserved nationwide are found in New Jersey, Maryland and Delaware. These states, along with Pennsylvania, have had preservation programs in place for 30-40 years and are considered leaders in these efforts.

In New Jersey, 207,000 acres – about 29% of the farmland base – has been preserved.  That’s the highest percentage of any state in the nation. And current plans in 16 counties are ambitiously aiming to preserve another 240,000 acres.  It wasn’t always this way.

As the most urbanized state in the nation, New Jersey has lost about two-thirds of its farms and about half of its farmland since the 1950s. Efforts to curb the trend began in the 1970s, and the current program was established in 1983 under the Agriculture Retention and Development Act.

Like most states, paying for preservation is a major issue in New Jersey. Part of the funding comes from the state via the State Agriculture Development Committee, while the counties and municipalities typically cover the remainder through taxes (sometimes with support from non-profit preservation organizations). The good news for New Jersey preservation efforts: this issue is popular among the voting public.

“We’ve spent about $1.6 billion over the last 30 years to protect farmland in New Jersey,” explained Schilling. “Eleven times since 1960, policymakers have put farmland preservation referenda on the ballots for voters to decide. Even in down economic times, voters continually support them.”

But even with voter support, lack of funding still limits what can be done. This and other challenges facing New Jersey’s efforts are also felt elsewhere. The national conference helped by bringing stakeholders together to share their experiences and collaborate on new ideas.

Learning from the Best
Representatives of new, fledgling programs obviously have a lot to gain from attending a national conference, but even mature programs have a long road ahead and much to learn.

For example, one challenge faced is the struggle to keep pace with shifting priorities and an evolving agricultural industry. When the programs were designed 40 years ago, preserved farmland was intended for agricultural purposes only. “Non-agricultural use’ meant something to us in the 1970s when these discussions started,” said Schilling. In recent years, wineries, agritourism, greenhouse construction, equine businesses and other non-traditional operations have developed on preserved farms. “Are these violation issues or do we need to adjust our regulations?” poses Schilling.

The well-attended conference gave all participants the chance to share solutions for funding pressures, discuss the growing challenge of monitoring and fulfilling stewardship obligations as the number of preserved acres increases and debate concerns over how land is used and whether policies and regulations need to be amended.

To learn more about the Farmland Preservation Conference, contact Dalynn Knigge at Rutgers Office of Continuing Professional Education at 732-932-9271, ext. 622 or by email at knigge@rutgers.edu.