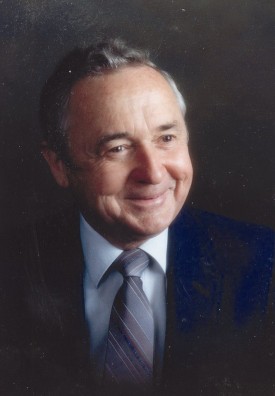 According to Bruce Clarke, chair of the Department of Plant Biology and Pathology and director of the Center for Turfgrass Science, this fundraising effort was initiated in 2007 to provide an ongoing source of funding for graduate students in turfgrass science at Rutgers. Clarke expressed appreciation “to the NJTA and NJTF for their tremendous support of the Henry Indyk Endowed Graduate Fellowship, to the tune of more than $150,000 in funding since we started our campaign.”

The fellowship is named in honor of the late Henry Indyk, AG ’50, professor emeritus and extension specialist in turfgrass management at Rutgers. Over the course of more than 50 years, Indyk worked to promote excellence in turfgrass science in New Jersey and across the U.S. “With the establishment of the Indyk Graduate Fellowship, Henry’s legacy and his support of graduate education will live on forever. What a fitting tribute to one of the great turfgrass extension educators of our time,” added Clarke.

Indyk, who passed away in 2005, was instrumental in the formation of the NJTA and the Cultivated Sod Association of New Jersey during his illustrious career. He gained national and international prominence for his expertise in turfgrass management.

Clarke thanked the Indyk family for their financial support of the graduate fellowship, and the many turfgrass associations and turf managers throughout the U.S. who contributed to the fundraising effort of the Rutgers Turfgrass Program. 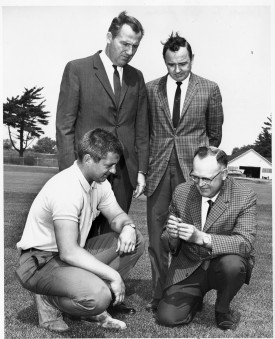 Henry Indyk (top right) with C. Reed Funk (bottom right), Ralph Engel (top left), and a turf management technician (bottom left). The photo was taken sometime in the late 1960s on the current site of the parking lot across from IMCS. At the time, this was the location of the fine turf research farm, which was moved to Hort Farm II in the mid-1980s. Photo courtesy of Bruce Clarke.

A 1993 New York Times article on Hendy Indyk provides an in-depth look at his work and its impact. You can also read the following tribute, titled “The Henry W. Indyk Legacy,” written by the late NJTA Executive Director Dick Caton, and Rutgers faculty members James Murphy and Bruce Clarke, following the death of Indyk in 2005.

“Five decades of professional experience in turfgrass management earned Dr. Henry W. Indyk world-wide recognition. His contributions towards the cause of better turf during the more than 30 years as an Extension Specialist  in Turfgrass Management at Rutgers University, and the 15 years after his retirement from Rutgers in 1990 are legendary. He worked to promote excellence in turfgrass science and his efforts resulted in an elevated image of the turfgrass industry.

Dr. Indyk lectured nationally and internationally on the topic of turfgrass management. He was an outstanding lecturer and presented programs from coast to coast, most of which dealt with athletic field construction, establishment, maintenance and renovation. His knowledge of soils and drainage components were key elements involved in these programs. Dr. Indyk championed natural turfgrass over any other kind of playing surface. He advocated certification of seeded turfgrass varieties and initiated a sod certification program in New Jersey, the first of its kind in the United States.

Dr. Indyk was integral in developing the concept of modular and movable turfgrass playing surfaces. He also served as a consultant in the re-construction of the Los Angeles Coliseum playing field for the 1984 Olympics.”