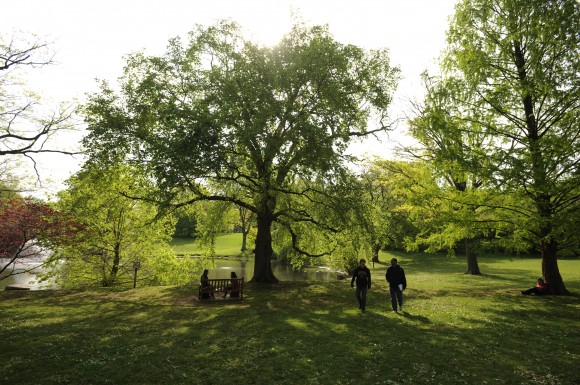 Allergy sufferers in New Jersey and in the Northeast are already put on notice as their eyes start to tear and itch, and their symptoms are only expected to increase as tree pollen levels begin to soar.

Leonard Bielory, M.D., a specialist in allergy and immunology at Robert Wood Johnson University Hospital and at the Rutgers Center of Environmental Prediction at the School of Environmental and Biological Sciences, thinks that the increased snowfall this past winter promises a very robust allergy season.

Although pollen counts at the start of the season are low, relatively small amounts can cause strong allergic symptoms, says Bielory. Tree pollen counts between 0-14 (low) pollen grains per cubic meter of air are enough to cause symptoms such as sneezing, itchy and runny nose, and runny eyes in adult allergy sufferers and somewhat less so in children.

In some patients who have had the flu or other viral affecting the upper respiratory tract, “the sensitivity of the nose and eyes may have been increased through previous infections like winter colds or flu,” adds Bielory.

He and colleagues have been engaged in a long-term study of the effects of climate change and allergic airway disease. They expect more tree pollen than ever to be released this spring and the reaction to the early pollen to continue to be unusually strong.

“We have been developing models in order to forecast pollen production and its impact on allergies,” he says. Among the most recent and unexpected findings that his research group has validated is the link to precipitation from the previous year. “We can also expect that the tree pollen season to be present not for a longer period of time, but in heavier concentrations due to the extreme cold and heavy snow cover we had this past winter.”

Pollen allergy sufferers who would like to discover more about the connection between their individual symptoms and the pollen count in their area are invited to visit NYNJpollen.com. They might also consider using the electronic pollen diary from iTunes or iPollenCount™ to record and graph their symptoms and send these to their doctors.