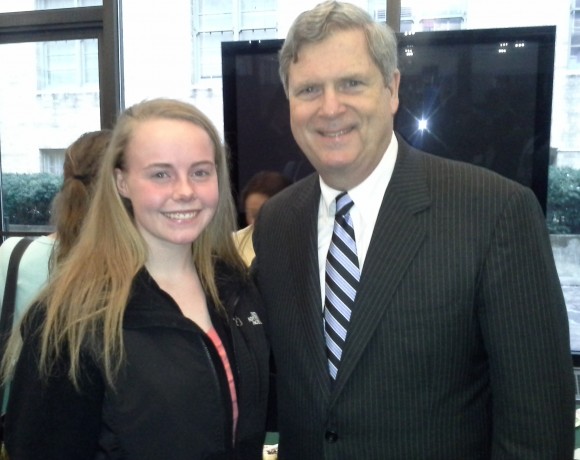 Renee Stillwell, Mercer County 4-H member, was invited by the Office of the Secretary of Agriculture to be one of a handful of youth to speak at the USDA symposium commemorating the 100-year anniversary of the birth of plant biologist and humanitarian Norman Borlaug, who was awarded the Nobel Peace Prize in 1970 for a lifetime of work to feed a hungry world.

Stillwell, a 15-year old sophomore at Allentown High School, credits 4-H for her leadership and public speaking skills, which gave her the chance to participate in the symposium named for Borlaug, widely credited with having “saved more lives than any other person who has ever lived” as a result of his efforts to prevent hunger, famine and misery around the world. Through the development of new wheat varieties and improved crop management practices, Borlaug transformed agricultural production in Mexico during the 1940s and 1950s, and later in Asia and Latin America, sparking what today is known as the “Green Revolution.”

An accomplished speaker who has qualified to present at the state public speaking contest each of the past three years, Stillwell scored high enough in her first year to receive the 4-H Silver Bowl Award for an outstanding presentation on the 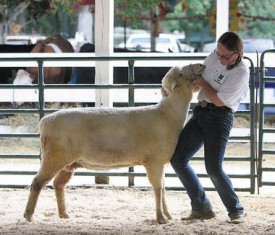 history of 4-H and Cooperative Extension. She’s been a member of Mecer County 4-H for seven years and is the current Vice President of the Clever Clovers 4-H Club. Her projects include raising and showing Hampshire and Dorset sheep.

In addition, Stillwell was one of eight 4-H members from Mercer County to attend the recent National Youth Agri-Science Summit at the National 4-H Youth Conference Center in January. She says that her experiences at the summit strengthened her belief in the importance of advocating for agriculture and increasing the public’s awareness and understanding of modern food production practices.

In addition to 4-H, Stillwell is also very active in Future Farmers of America. She placed first in the New Jersey soil judging competition and subsequently participated in the national land judging contest in Oklahoma. She was also selected to receive the State Star Greenhand Award.

Stillwell is excited to take advantage of every opportunity to learn more about agriculture and plans to go to college to study to become a high school agriculture teacher.

USDA’s Deputy Secretary Krysta Harden opened the Borlaug Symposium, which was designed to be highly interactive with audience engagement. The diverse list of panelists included high school and university students, scientists, and policy advisors from the U.S. Agency for International Development and the USDA, as well as representatives from several non-profit organizations. The symposium, which was held at USDA in Washington, D.C., on March 25, was streamed live from USDA’s website at www.usda.gov/live.