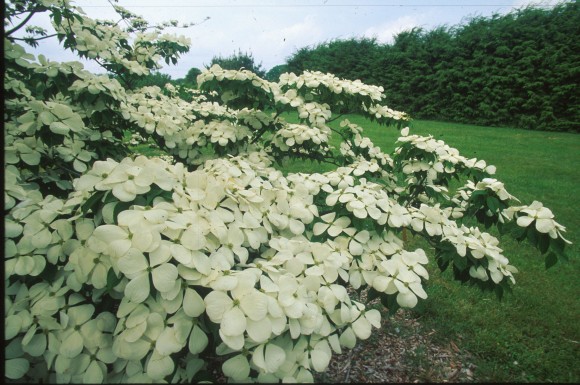 Orton’s dogwood variety Ruth Ellen® was named for Ruth Ellen Steinman Bloustein. At peak bloom in the spring, this variety produces a flower that is a brilliant white color.

Rutgers Professor Emeritus of plant biology and pathology Elwin Orton was the recipient of the prestigious 2013 Hutchinson Medal of the Chicago Horticultural Society. The award has been presented since 1911 to recognize outstanding leadership or professional accomplishment that has been significant in furthering horticulture, plant science or conservation. As a breeder of woody ornamentals, Orton has earned over 15 patents for new strains of dogwoods and holly that he developed over his almost 50-year career at Rutgers.

In addition to the Hutchinson Medal, a newly published monograph on dogwoods authored by Andre Gayraud of France and published by an Italian nurseryman, Fabrizio Tesi, of the Giorgio Tesi Group. The monograph, “All you want to know about Cornus,” includes a chapter on Orton’s dogwood hybridization research and is being published in six languages.

Orton was inducted into the New Jersey Inventors Hall of Fame in 2012 and was credited with “saving the U.S. dogwood industry” with new strains of hardy, disease- and pest-resistant hybrid dogwoods when diseases and insects threatened the native species of the popular flowering tree.