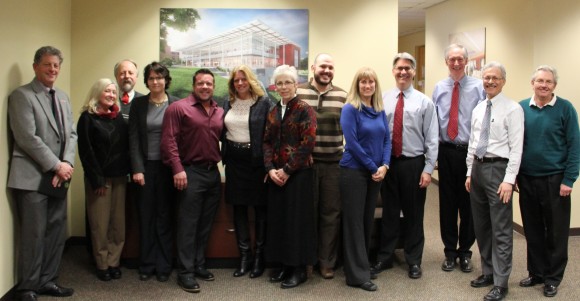 On February 24, the New Jersey Institute for Food, Nutrition & Health (IFNH) held the first official meeting of its collective leadership team. The leadership team is made up of institute champions and advocates from three academic departments, three major staff organizations, and three schools within the university, underscoring the institute’s core values of interdisciplinarity, collective success and community responsibility.

Among the important topics considered during the meeting were the translational nature of the institute’s research; programs in areas of molecular nutrition, childhood obesity, community outreach & education, health information technology in the 21st century and the future of foods; the IFNH Leadership Advisory Board, which is comprised of individuals from across the university; and IFNH governance in general. 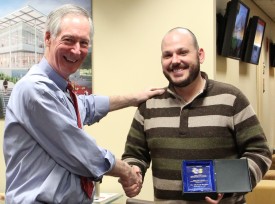 One of the highlights of the meeting was the presentation of the Director’s Award for Scientific Excellence to Prof. Michael Rogers of the Department of Food Science. Rogers was recognized for his leadership and success in building the Center for Gastrointestinal Physiology Research, which became an integral part of the IFNH in 2012.

The IFNH, located on the Rutgers George H. Cook Campus, broke ground in 2013 on the construction of a physical space where interdisciplinary research, teaching and outreach to the community will take place. The iconic three-story facility will include modular open-space research laboratories supported by clinical research facilities, a human performance center, a childhood nutrition learning center, a conference center, and a healthy eating courtyard. It will also be the location of a new student health center that has a special focus on nutrition and healthy lifestyle counseling. The facility is on track to be completed in 2015.