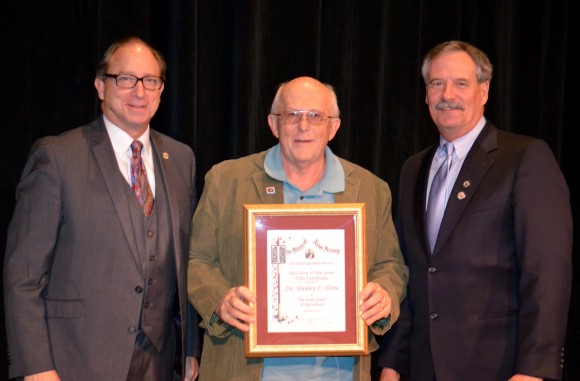 Wes Kline, center, receives the Distinguished Service to New Jersey Agriculture award at the NJ Agricultural Convention. Kline is flanked by NJ Department of Agriculture Secretary Doug Fisher, at left, and Robert Swanekamp, president of the NJ State Board of Agriculture.

Wesley Kline, agricultural and resource management agent with Rutgers Cooperative Extension of Cumberland County, received a 2014 Distinguished Service to New Jersey Agriculture award at the annual State Agricultural Convention on Feb. 5. The Distinguished Service Awards are presented each year during the convention banquet by the New Jersey State Board of Agriculture (SBOA) to honor “lifetime service to the agriculture industry and professional accomplishments that contributed to the advancement of the industry.”

Since 1932, the SBOA has awarded the prestigious citation for “Distinguished Service to Agriculture” to individuals who have given of their time and talents to the advancement and betterment of the agricultural industry and rural life in New Jersey. The award recognizes and honors those individuals who have made outstanding contributions of public service to New Jersey agriculture. Up to six Distinguished Service awards can be given each year, with a maximum of four awards to farmers and two to non-farmers. This year Kline was a joint recipient with Mercer County grain grower Steven R. Jany.

Kline is responsible for the commercial vegetable and herb production programs in Cumberland County. His research and extension activities are based on growers’ needs in integrated pest management, cultural practices and post-harvest handling. In recent years, Kline has focused on food safety, cultural systems related to phytophthora blight of pepper and production systems for tomato. Along with RCE senior program coordinator Meredith Melendez, Kline conducts extensive programming for farmers that focus on compliance with the Food Safety Modernization Act.

Other Rutgers NJAES faculty who have received the Distinguished Service Award from the New Jersey State Board of Agriculture in recent years include retired faculty Jerome Frecon, Arthur Brown, Ed Milewski and William Roberts, and the late Sridhar Polavarpu and Jonathan Forsell. 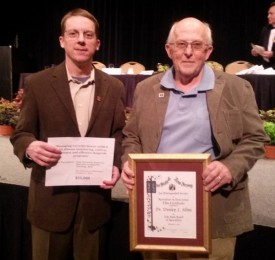