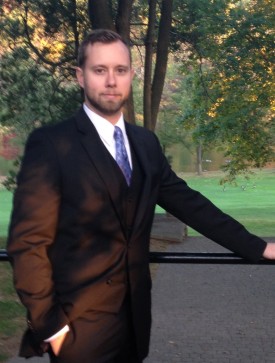 Dane Jensen, Ph.D. food science candidate whose mentor is Professor Donald Schaffner, was awarded the Wilbur M. Runk Merit Scholarship Award. This annual scholarship was established in honor of former Cumberland County agricultural agent Wilbur M. Runk by his family to provide monetary support to one or more graduate students enrolled in a graduate program at the the School of Environmental and Biological Sciences and mentored (as major advisor) by any faculty member with an extension specialist appointment. It is intended to assist the students in pursuing their educational goals.

Schaffner had this to say about Jensen. “I first met Dane when he asked to work in my lab as an undergraduate student and I could immediately see that he had potential. He has a strong work ethic, a clear attention to detail, and a pleasant easygoing demeanor. I was happy to find that he was considering graduate school and even more excited when I convinced him to take a graduate assistantship in my lab. He’s been a real asset to my team as both a M.S. student and now as a Ph.D. student.”

Schaffner adds, “As Dane became more interested in handwashing research, he noticed that handwashing signs posted in different states and counties were often quite different in their recommendations. With only a little direction from me, he completed a comprehensive on-line search, cataloging more than 80 handwashing signs used around the U.S. He is currently working on a numerical analysis of their recommendations, and a draft manuscript based on that analysis.” Dane plans to graduate in the Class of 2015. 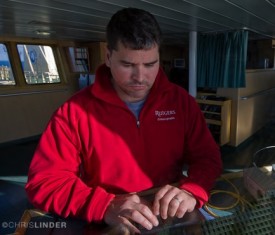 The Merle V. Adams Award is given in honor of the long term chair of the Agricultural and Resource Management Specialists Department and his dedication to the faculty he served. It is a monetary award that can be used for furthering the recipients’ professional career and has been an annual feature since it was first presented in 1987. The Merle V. Adams award is presented to a junior extension specialist faculty for their outstanding achievements within Rutgers Cooperative Extension and the 2013 recipient is Josh Kohut.

As a marine sciences faculty member, Kohut is dedicated to building a foundation for a career grounded in scholarship, teaching, and service. His efforts are focused on translating science-based research in a way that informs applications, decision-making and management of ocean resources. Kohut leveraged the significant infrastructure and collaborative environment of the Coastal Ocean Observation Lab (COOL) to begin an innovative program focused on the physical and ecological dynamics of the coastal ocean. He has been an integral part of the COOL Room since it was formed.

As the lab grew, he served as its first technical director and was responsible for the coordination of all the technologies to ensure that they served the variety of science and applied projects of the lab. He joined the faculty in 2008 and established an independent research program that expands the capacity and programming within the COOL Room. Kohut has secured funding from a number of state and federal agencies, which supports the development of new tools and analyses and facilitates multi-disciplinary studies centered on the dynamics of the coastal ocean.