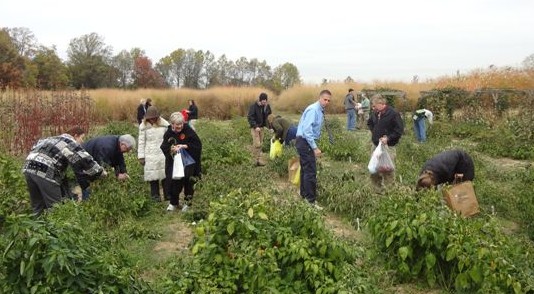 Members of Rutgers faculty and staff participate in the first “Harvest Your Own Pepper” event in the hot pepper research trial plots on Hort Farm 3. 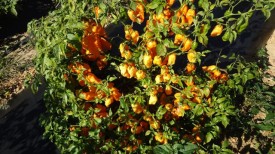 Yellow Habanero is included in the ethnic pepper research trials.

Use Agriculture and Natural Plant Products Program at Rutgers and Tom Orton, extension specialist in horticulture at Rutgers Agricultural Research and Extension Center (RAREC), have been conducting the 2013 pepper trial and demonstration at Horticulture Farm 3 on campus, comparing selections being evaluated for different cultural groups in New Jersey and the Mid-Atlantic. The pepper trials are also conducted at the off-campus research farms, RAREC in Bridgeton and the Snyder Research and Extension Farm in Pittstown. The selections target three categories of peppers: African birdeyes (Capsicum frutescens), Jalapeno & Serrano types (C. annuum) and Habaneros (C. chinense). In each category the peppers are selected for plant size, yield, fruit size/shape, skin texture, heat level and flavor. The goal of the project is to develop the pepper types for various ethnic markets in New Jersey and the Mid-Atlantic to respond to ongoing demographic changes and culinary preferences. The team is also investigating the chemical attributes of the peppers from nutritional and therapeutic perspectives. In addition, in some of the recent trials they have identified a few that have significant ornamental properties. 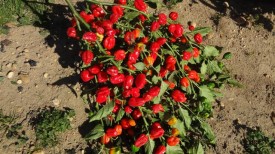 This year’s pepper trial took on a new element. On October 30, a number of people from the Rutgers community responded to the call for the first “Harvest Your Own Pepper” (HYOP) event, which took place at Horticulture Farm 3. Ayeni, who had sent out an announcement a few days earlier inviting people to come to the research plot on Hort Farm 3 on Ryders Lane to harvest their own peppers, was very pleased at the response. “It was surprising to see such a turnout with such short notice; in excess of 20 people were counted in the field at one point.”

He added, “We are encouraged by what we saw and heard people say about the experience and plan to repeat the call in October 2014 with a broader spectrum of peppers with Scoville Heat Units ranging from zero to 300,000.” The harvesting event may lead to a spin-off event next year, indicated Ayeni. “We are also thinking of starting a hot pepper contest next fall. Thanks to those who came, we look forward to seeing you and many more come October 2014.”