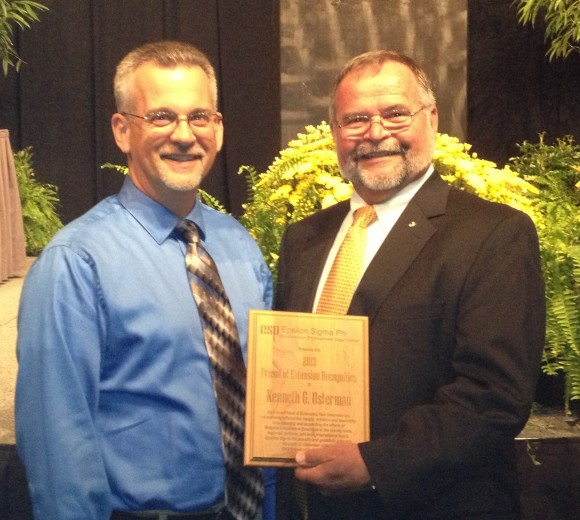 Epsilon Sigma Phi (ESP) honorary fraternity represents extension agents in 4-H, agriculture and resource management, family and consumer health sciences, and environment and natural resources, and is dedicated to fostering standards of excellence in the Extension system and developing the Extension profession. Each year ESP’s award program pays tribute to Extension professionals who have exhibited leadership and excellence in Extension programming. In addition, ESP recognizes individuals who have contributed to the support and success of Extension programs across the country. The contributions these individuals make are extremely important in the states and communities where they provide assistance.

This year there were nineteen individuals that were nominated by the ESP chapter in their state and four applicants were selected from the nineteen to receive the prestigious Friend of Extension Award for 2013. Ken Osterman, who received the 2013 Friend of Extension award from the New Jersey chapter, Alpha Xi, was one of the four national winners.

In May , the New Jersey Chapter of the ESP announced its 2013 awards, recognizing over a dozen Rutgers Cooperative Extension (RCE) faculty and staff. The 2013 State Epsilon Sigma Phi award winners automatically qualified as nominees for the regional and national ESP awards, which were presented at the annual ESP National Conference held at Galaxy IV in Pittsburgh, PA, September 16-20, 2013. 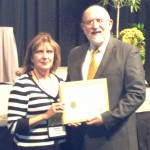 The National ESP program acknowledged the role Osterman has played in New Jersey agriculture. As a true Friend of Extension, Ken Osterman has consistently and repeatedly offered his insight, initiative, and leadership in supporting and expanding the efforts of Rutgers Cooperative Extension at the county, state, region, national, and even international levels. From local agricultural and programmatic efforts to much more broadly defined advocacy, outreach, and business incubator issues, Osterman is a recognized leader at Rutgers Cooperative Extension and throughout New Jersey’s agricultural and Land Grant College communities. He has led funding efforts to build up a local scholarship for undergraduate students and colleagues to begin or expand their studies and careers in the agricultural sciences. Osterman had chaired several local and state advisory boards vital to Rutgers Cooperative Extension’s present and future efforts in meeting our mission in all program areas. He has also advised and advocated for innovation and business development utilizing Cooperative Extension’s outreach model and unbiased research-based approach to the many challenges facing new, small, or growing agribusinesses. 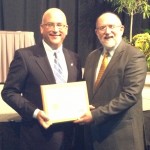 The International Service Recognition was awarded to Robin Brumfield, extension specialist in agricultural economics and marketing, for contributing significantly to the development and/or expansion of an Extension program in other countries through in-state and/or overseas work.

Also, the Alpha Xi Chapter received the Chapter of Merit – Gold Award and the Achievement in Chapter Membership  Platinum Award.