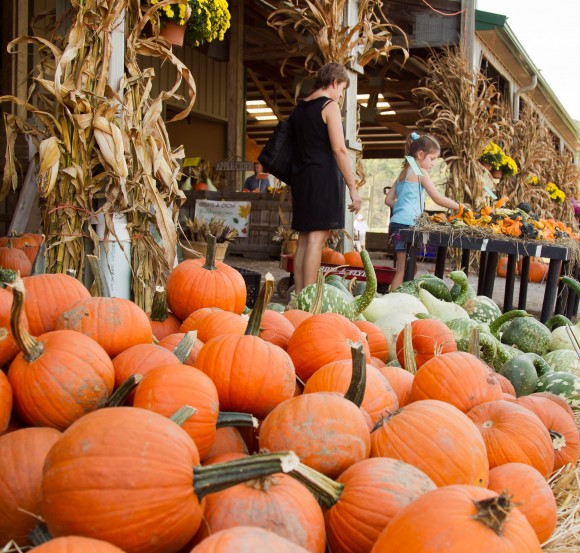 A Hunterdon County farm offers plenty of pumpkins, gourds, mums and cornstalks to their agritourism customers. Photo by Jack Rabin.

VonThun Farms of Monmouth Junction, NJ, is a regular vendor at the Highland Park Community Farmer’s Market every season. As the days grow crisp and fall is in the air, VonThun’s end their participation in the community market, even though the market is open for many more weeks. Did they run out of produce and are ready to put the farm to bed for the winter? Quite the contrary. VonThun’s wrap up their off-farm venues so all hands are on deck for what can only be considered a fall extravaganza at the farm. VonThun’s is just one of many New Jersey farms that feature agritourism events that draw huge crowds to their farm.

Although many farms have been conducting on-farm activities such as Pick Your Own (PYO) operations for decades, the term “agritourism” wasn’t coined until the mid-1990s when it became a focus of agricultural direct marketers associations. Agricultural Agent for Rutgers New Jersey Agricultural Experiment Station (NJAES) Cooperative Extension in Atlantic County Rick VanVranken admits, “I met the sudden interest in a new buzz word with a “ho-hum” because New Jersey direct marketers had been doing hay rides, petting zoos, PYO experiences and the like for decades – and not necessarily on a small scale!” But catch on it did, and eventually “agritourism” became the main theme of the regional direct marketers conference for the Mid-Atlantic, where “corn mazes became the focus of the new wave,” adds VanVranken.

Indeed, it is “a-maizing” what farms can do with corn mazes. But that’s not all. While some farms stick with well-loved activities like pumpkin and apple picking and hayrides, other farms like VonThun’s go all out with festivals that evoke family fun while still featuring an agricultural, atmosphere. Haunted hay rides, pumpkin cannons, pony rides, petting zoos, bonfires, haunted barns, hay pyramids and more await families looking for a day’s entertainment at numerous farms around the state.

While a day’s fun at a farm can provide wonderful memories for young and old alike and bring in an additional stream of revenue for a farm, there is an enormous amount of preparation, planning and consideration that go on back stage, or in this case, “behind the barns” in order to successfully execute a grand production. 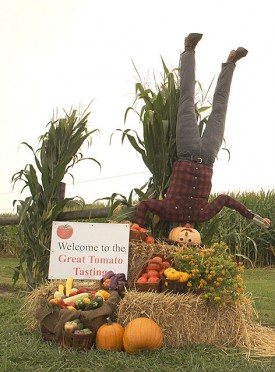 Everyone flips for fall fun at a farm. Even Rutgers uses agritourism to present its research to the public through the annual Great Tomato Tasting in August at Rutgers Snyder Research Farm in Pittstown. Photo by Zach Tinawi.

Rutgers NJAES Agritourism Working Group provides farmers with the information they need for business planning, risk management, marketing, and production for their agritourism ventures. Michelle Infante-Casella, agricultural agent for Gloucester County, explains the very first steps farmers need to consider. “We, as an agritourism team, highly recommend using a “SWOT Analysis” before going into an agritourism venture. Analyze the Strengths, Weaknesses, Opportunities, and Threats (both internal and external) that will affect an agritourism venture.” From there, it gets into the nitty-gritty; this is not a venture for the faint-hearted. Before the first pumpkin is in place, Infante-Casella discloses a hefty list of considerations before undertaking an on-farm agritourism operation: food safety, marketing and promotion, farm safety, insurance and liability, parking and traffic concerns, employees, budgeting, risk management, profitability, government regulations, products, production of agricultural commodities, and competition/collaboration from surrounding businesses in the area.

With all the considerations and work involved (as if farmers didn’t have enough work already), why would a farm want to bother with such an endeavor? Because: Orange is the new Black Friday. What the opening day of Christmas shopping season does for retailers in moving ledger entries from losses to gains, so too can Halloween season serve for farmers engaged in agritourism. While not all farms focus agritourism events on fall, Infante-Casella says, “If their main PYO product is strawberries, then it is spring”. But, she adds that “most agritourism farms gear up for the fall harvest season.”

Aside from all the additional benefits to customers, farmers and surrounding communities, the bottom line is that agritourism pays off in a big way. In 2006, Brian Schilling, extension specialist with Rutgers NJAES in agricultural policy and Lucas Marxen, research analyst at Rutgers NJAES, conducted a survey, “The Economic Impact of Agritourism in New Jersey”. Their results were impressive. The data showed that farm income from agritourism totaled $57.5 million. According to Schilling, “From a national perspective, New Jersey is a leading agritourism state. The data shows that we rank fourth in agritourism income (among all states) and first in the percent of total farm income derived from agritourism.”

But farmers aren’t the only ones to benefit financially from agritourism activities. A modeling system was used in conjunction with the survey to measure the economic linkages between agritourism and the rest of the New Jersey economy. For every dollar in agritourism sales generated at the farm-gate level, an additional $0.58 of sales activity was created in other businesses, from gas stations to restaurants and insurance providers to pallet and packaging manufacturers. This translates into an additional $33.3 million in revenue in other predominantly non-farm businesses throughout New Jersey. The survey found that, in total, agritourism was responsible for generating $90.8 million in revenue statewide in 2006. In addition, associated state and local taxes raised as a result of agritourism were estimated to be on the order of $8.1 million. 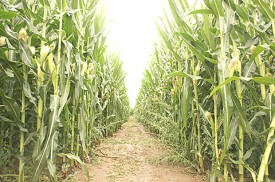 The view from the ground doesn’t reveal the complexity of a corn maze, some of which have striking aerial views. Photo by Zach Tinawi.

Back to those corn mazes. Of all the fall agritourism activities, these can be the most large-scale productions. From the ground, these massive mazes can keep participants wandering around for hours. From an aerial view, the elaborate designs are as awe-inspiring as crop circles, leading one to wonder “How do they do it?” Schilling says, “Corn mazes can be produced at any scale and level of sophistication. Some farms opt to design and cut their own (e.g., with graph paper). Others hire professional outfits to design and initially cut very complex, themed mazes. Some develop a theme around a charitable interest or sports team.”

Bill Hlubik, agricultural agent for Middlesex County, cites an intriguing example of a maze tribute. “Several years ago, the VonThun farm developed a corn maze around the theme of the Rutgers Football Team in cooperation with guidance from Rutgers University. During one of the Rutgers Football games, the ESPN blimp had an aerial shot of the corn maze, which helped to promote both their farm and the University.” That’s quite a RU RAH!

Besides the impressive designs that corn mazes manifest across many acres, equally impressive is the varying levels of assistance provided to maze followers. Farms may provide passports, clues, navigation videos and interactive games as guides. And, in the era of “an app for everything,” smart phone technology has come to the corn maze in the form of “corn texting.” Bill Bamka, agricultural agent for Burlington County, explains. “Some of the more complicated mazes are using maize or corn texting to provide hints or clues to navigate the maze using your smart phone. Typically, there is a sign in the maze with TEXT directions to receive hints to follow or a QR code. It lets more timid participants navigate the maze knowing they have some clues. It also avoids 911 calls when participants get lost.”

Although too numerous to include them all, some highlights of “a-maizing” maze themes around the state include a tribute to Firefighters at Alstede Farms in Chester, NJ; the Garden State’s Governor’s Race (with images of candidates Chris Christie and Barbara Buono) at Stony Hill Farms, also in Chester, NJ; and Battleship New Jersey at Sahl’s Father Son Farm in Galloway, NJ.

Aside from using corn for mazes, Rutgers Agricultural Agent Steve Komar worked with growers in Sussex County, and now being repeated in other areas, to develop summertime mazes using sunflowers. This helped growers extend the agricultural attraction season and helped to spread the word to nearby communities about coming back for the fall offerings.

There are fall agritourism activities galore around the Garden State. To find farms near you go to www.visitnjfarms.org or www.jerseyfresh.nj.gov. While you’re there, don’t forget to pick up some pumpkins, apples, mums, apple cider, apple cider donuts, cornstalks, gourds or Indian corn. Maybe the last Sunday before Halloween just might become “Orange Sunday” in New Jersey.

Find back issues and subscribe to What’s in Season from the Garden State.