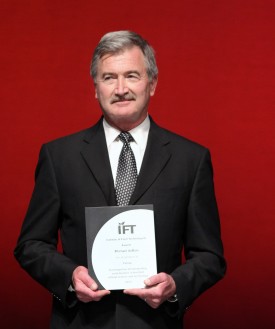 Michael duBois, director of the Food Innovation Center (FIC) – South, was officially recognized as a 2013 Fellow of the Institute of Food Technologists (IFT) at an award ceremony at the institute’s annual meeting on July 13 in Chicago, IL. Only a small percentage of IFT members are so honored by their peers each year and duBois was recognized for his scholarly advancement and service to the food science and technology profession.

Also at the IFT annual meeting, duBois was recognized as being part of an inaugural group of about 1,200 individuals worldwide to have achieved the status of IFT Certified Food Scientist.

DuBois was considered for his work in building collaborative organizations committed to enhancing the esthetics, value, and nutrition of food and beverage products worldwide. Throughout his career, he has played a global leadership role in the food ingredients industry, contributing to advances in technology and enduring partnerships. He has served on the Board of Governors of the Flavor & Extract Manufacturers Association and the Board of Trustees of the IFT.

Since completing his graduate work in Food Science and Technology at Oregon State University, he has been a strong advocate for enhancing the nutrition, freshness, variety and availability of food as well as easy access of information to consumers to help them make smart dietary choices.