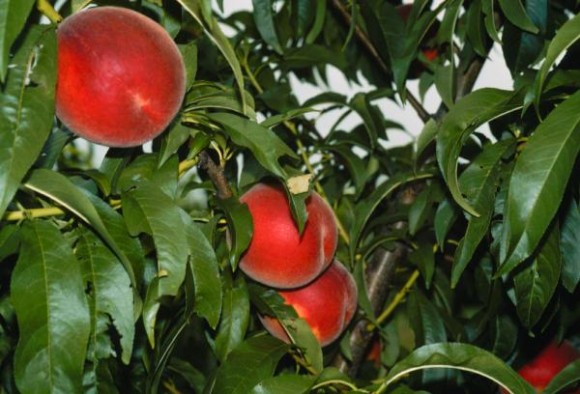 As the old Frank Sinatra song “High Hopes” goes, “anyone knows an ant can’t move a rubber tree plant,” unless, of course, “he’s got HIGH hopes.” So how could an insect move orchards? No high hopes needed, just piercing/sucking mouth parts that suck plant juices from twigs, branches, fruit and foliage. Such is the case with San Jose Scale, the insect that moved New Jersey orchards.

Farmers have been growing peaches in New Jersey since the 1600s. By 1680, peaches were found in abundance in orchards from Trenton to New Brunswick. The area of production spread north to Morris County and around Hackettstown. The peach was New Jersey’s first fruit to be sold commercially and wagon loads of peaches from New Jersey orchards were marketed in New York City and Philadelphia. By the mid 1800s New Jersey was known for its abundance and quality of peaches. In 1890, there were more than 4 million trees in the state, and half of them were in Hunterdon County.

In 1886 San Jose Scale, a tiny crawling insect, gained its first foothold in the Eastern U.S. at a nursery near Riverton, NJ, arriving on plum trees from a California nursery. Before a control measure had been discovered, San Jose Scale (SJS) had spread throughout the state killing thousands of acres of peach trees, practically wiping out the New Jersey peach industry in the early 20th century. By 1920, there were fewer trees in all of New Jersey than in Hunterdon County in 1890.

SJS was introduced to California from China on flowering peach in the early 1870s and by the late 1890s it had spread to all parts of the U.S. SJS is considered one of the most destructive scale insect pests in the U.S., not only of fruit trees, but also shade trees and ornamental shrubs. Although an individual scale doesn’t cause much damage, a single female and her offspring can produce several thousand scales in one season. If uncontrolled, they can make fruit unmarketable and eventually kill trees.

A shadow of its former self, the New Jersey peach industry began to re-establish itself, with new orchards springing up in South Jersey, with the majority eventually locating in Gloucester County. Rutgers professor emeritus Jerry Frecon, after studying the industry’s history, explains how the shift from north to south came to be: “Hunterdon County had good rolling peach land and was close to the major consuming markets in North Jersey and New York. Peaches were very perishable and could not be shipped any distance. As better varieties were developed they could be shipped farther. Southern Jersey became more populated by Swedish, German and Italian immigrants who knew how to grow a variety of crops including peaches. Hunterdon had lower temperatures resulting in freezes that killed peach buds, along with SJS that ruined many peaches. Southern Jersey had available land, a rapidly growing ag industry and milder weather.” 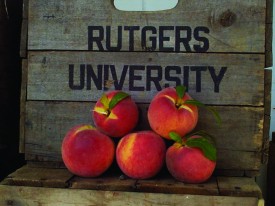 It certainly helped the industry that around this time the New Jersey Agricultural Experiment Station developed a breeding program for peach trees. New improved varieties of peaches that could be shipped farther helped the industry get a foothold in re-establishing itself. But what about the risk of new and remaining orchards once again succumbing to the devastation of SJS? Frecon explains, “Before the presence of SJS, the backbone of many orchard pesticide spray programs had been Bordeaux mix (a combination of copper sulphate and hydrated lime) and lime sulfur. Both were primarily fungicides, which didn’t have insecticidal properties, so the scale got established and became resistant to lime sulfur. Lead arsenate and calcium arsenate were then developed as broad purpose insecticides and controlled scale crawlers. Broad spectrum pesticides kill a wide range of  insects, regardless of species. Today, many of the broad-spectrum insecticides are no longer in use.”

This brings us to the modern day challenge of controlling this long established pest. While the days of using a highly toxic insecticide like lead arsenate are behind us, how are SJS and other pests of peach kept in control?

Toolbox of Techniques to Control SJS with Better Environmental Footprint 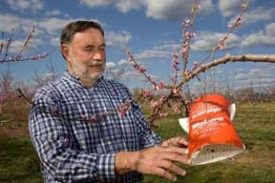 Enter Integrated Pest Management (IPM). IPM can be seen as a toolbox of practices to manage pests without continuous blasts of highly toxic pesticides. Some of the “tools” used by IPM are monitoring pest levels and the life stages of insects in order to recommend the most effective applications; use of degree-day based phenology models (using temperature to predict plant and insect development to treat for pests at their most vulnerable stages); use of pheromone based mating disruption techniques, and encouraging the use of biological control by using “soft” insecticides that preserve and conserve beneficial insects.

Since some of these techniques require rather involved monitoring, timing and recommendations, New Jersey farmers are not left on their own to collect or interpret IPM data. The Rutgers NJAES Cooperative Extension IPM program serves as control central for the operation – collecting the data through IPM scouts, pheromone traps, and environmental monitoring, crunching the numbers and recommending control measures. Participating IPM growers communicate with IPM staff, and then put the recommendations into practice in their orchards.

The Rutgers Fruit IPM Program has helped New Jersey peach and apple growers control SJS while using a combination of practices that include: monitoring the insect’s life cycle, use of horticultural oils that smother insects, soft insecticides that allow parasitoid survival, resulting in biological control that maintains a constant level of beneficial insects, and the use of new insect growth regulators, specific for the scale insect. The resulting system is in harmony with the Food Quality and Protection Act (FQPA). The FQPA requires EPA to set lower limits for pesticide residues in food to provide extra protection for children, who are most sensitive to pesticides, and has resulted in many changes in pest management practices.

This could be the happy ending to the story for Jersey peaches, but for any crop that has been around as long as the Jersey peach has, it is bound to ride through times that are “just peachy” and others that are “the pits”. While SJS is not as much a threat to the industry as it once was, 100 years after the spread of SJS across the U.S., another pest invader from Asia poses a threat to Jersey peach crops: the Brown Marmorated Stink Bug (BMSB). Much like SJS, the piercing/sucking mouthparts of BMSB can ruin fruit crops as well as vegetables. As BMSB began threatening crops, IPM programs found they didn’t have the right tools in their toolbox to deal with this new invader. Getting it under control required the use of harsher materials, including broad spectrum pesticides that killed some of the beneficial insects that were parasitoids and predators of SJS. This, unfortunately, tips the scales back in favor of the scales – without the beneficials, SJS populations have been known to increase. The BMSB, according to Dean Polk, Rutgers IPM fruit agent, “has set the clock back for IPM.”

Coming up with better methods to control BMSB is a work in progress. Efforts are under way to create new tools for BMSB that maintain the integrity of IPM practices. Polk describes some of the strategies that researchers and the Rutgers IPM program are working on: After observing that BMSB enters orchards from the edges, a spray program that treats borders only, approximately 20% of the orchard, was successful last year on New Jersey farms and is again being tested this year; Rutgers NJAES researchers are looking at ways of combining mating disruption for other orchard insects, with methods for BMSB control. Other options under investigation include work in a multi-state project investigating the use of parasitoid wasps from Asia, which complete their larval development in BMSB eggs; new pheromones and trap designs for monitoring BMSB; and new ways of delivering small amounts of insecticides to only those areas where BMSB are present.

In its 400 years of existence, the Jersey peach industry has been through many changes. There are no less challenges to the industry today than what farmers endured in New Jersey’s colonial era and beyond. But one thing has not changed: Jersey peaches are as juicy, tangy and luscious as ever. The best places to find fresh tree-ripened Jersey peaches are local farmers markets or farmstands. Jersey peaches and nectarines can be found at farm markets throughout North, Central and South Jersey. Several orchards host pick-your-own operations. Listings for all of these can be found at the New Jersey Department of Agriculture’s Jersey Fresh website. 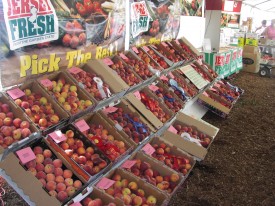 At the NJ Peach Festival, the state’s top peach growers compete in the commercial peach pack competition. Judges select the best firm and ripe peaches from samples taken at random from peach packing and shipping facilities. The best box is awarded the Governor’s Cup.