New Jersey farmers, whether organic or conventional growers, have been introduced to alternative ways to control pests other than chemical pesticides. Rutgers Integrated Pest Management (IPM) program for fruits and vegetables gives farmers the tools they need to keep pests under control, without solely relying on pesticides. View our Rutgers IPM image gallery below and read the article that follows from MyCentralJersey.com to find out how Rutgers IPM works and what farmers are saying about the program. 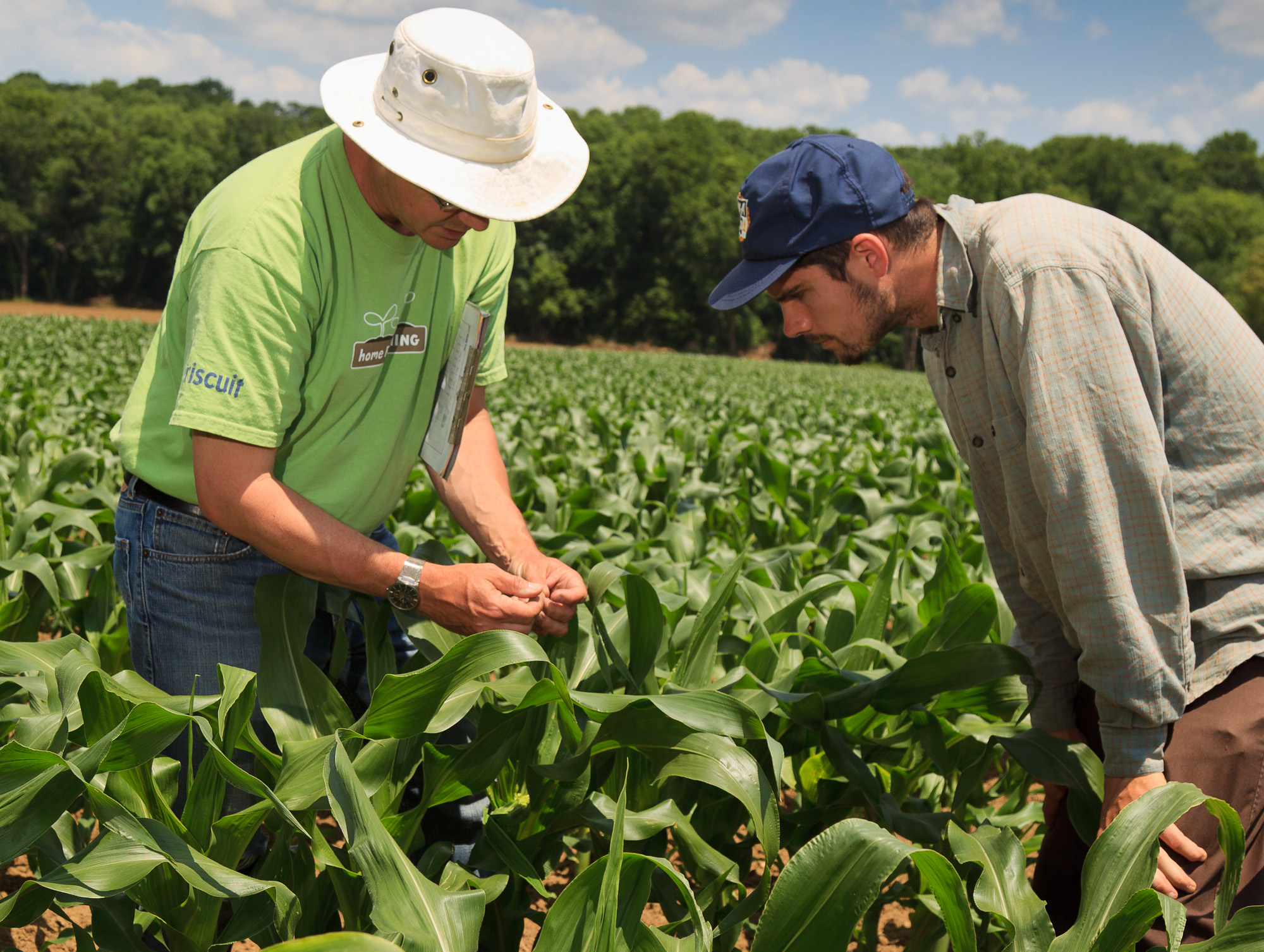 When a barrage of brown marmorated stink bugs descended upon New Jersey in 2010, Hauser Hill Farms was not about to surrender its popular yellow, white and doughnut peaches.

Nor was the family farm in Old Bridge willing to sacrifice its harvest of apples, nectarines, sweet corn and tomatoes — among the other fruits and vegetables fancied by the invasive Asian pest.

The stink bug is a formidable opponent — so sly, in fact, that it can ruin produce before farmers even realize it.

“It can take bites the consumer would never see on the outside. It puts its sucker in to suck out the juices,” said John Hauser, who runs the 300-acre farm with his wife, Carolyn, and mother, Marie.

When it comes to battling pests, Hauser Hill Farms — a 2013 recipient of the New Jersey Agricultural Society’s Century Farm Award for being owned and operated by the same family more than a century — has a powerful ally.

Hauser Hill is one of more than 100 New Jersey farms utilizing IPM, or Integrated Pest Management, a program administered by the Rutgers University Cooperative Extension.

Among the benefits are immediate notifications of pest problems from as far away as Georgia and South Carolina, giving local farmers a heads-up on what to expect, and a chance to take appropriate action.

“Rutgers put us on alert,” Hauser said, recalling the scourge of the stink bugs.

Learning about the enemy

Because the shield-shaped pest was a relative newcomer not even seen in the United States until the late 1990s, Hauser had to quickly learn its habits.

“The stink bugs were more attracted to the riper fruit that had more color,” he said.

Kristian Holmstrom, a research project coordinator at the Rutgers Cooperative Extension Pest Management Office in New Brunswick, noted that the insect’s destruction of crops intensified in the later part of the summer, particularly during periods of hot temperatures and drought.

With guidance from Rutgers and information shared by other farmers who had endured the wrath of the stink bug, Hauser said he was able to apply an insecticide when it was most needed, and save between 90 percent and 95 percent of his harvest.

“Some farmers lost 50 percent or more of their crops,” he said.

A key mantra of IPM is to use pesticides only when absolutely necessary.

At the beginning of growing season, specially designed traps are installed at participating farms to measure the presence of pests.

Pheromones that replicate the scent of female moths are placed in some traps to lure males of the same species.

In other traps, vinegar laced with drops of dish soap snares fruit flies intent on ravaging the summer crop of blueberries and raspberries.

Between 12 and 15 traps will be in operation throughout the current season at Hauser Hill — including a nighttime “black light trap” with a bluish-purple fluorescent light that attracts all insects, providing a ready census of any spike in pests.

“If we get a new pest on the scene, they like the black light, too,” Holmstrom said.

Field technicians — many of them plant biology, entomology or environmental science students at Rutgers — pay weekly visits to each farm to check the traps, examine crops and monitor pest density in the area.

On a recent morning at Hauser Hill, a Rutgers technician used a large sweep net to take a sampling of pests from a section of grass.

Tree branches in the peach orchard were carefully shaken to dislodge hidden pests, resulting in six adult stink bugs falling into the “beating tray” below.

“Not enough to need any additional spraying,” Hauser said.

As opposed to following a set calendar schedule, IPM farmers rely on pest collection data before resorting to pesticide usage.

“We use what we call ‘threshold levels,’ ” said William Hlubik, a Rutgers Cooperative Extension faculty member at Cook College and the agricultural agent for Middlesex County. “If a pest reaches threshold level, then we’ll take action.”

When pesticides are required, the program stipulates using “the least harmful but most effective product,” Hlubik said, allowing farmers to “target the pests without harming the beneficial insects.”

At Hauser Hill, that means making sure ladybugs are protected.

Long beloved by children, ladybugs are aggressive eaters of aphids — leaf sucking predators with a penchant for feasting on fruits such as peaches and apples, and then leaving their droppings to further destroy the crops.

“As long as there’s a good ladybug population, they can pretty much control the aphids,” Hauser said. “Ladybugs are definitely our friends.”

In cases where helpful predators are not already present, the IPM team may recommend bringing them in.

That remedy has been used to protect the Celebrity tomatoes grown by the Micek Farm in Flemington.

Established around 1930, the family farm has been selling its baseball-sized slicing tomatoes at a roadside stand at the intersection of Routes 523 and 579 since the 1960s.

But the early-season crop, grown in “high tunnels” that protect the tomato plants from cold nighttime temperatures, is particularly vulnerable to destructive spider mites.

“They’re our No. 1 pest,” said John Micek, who can often be found with his sister, nieces and nephews manning the farm stand. “The number of spider mites can explode in a couple of days if conditions are right and you don’t catch the problem early.”

To prevent such outbreaks, Rutgers’ pest management team has brought wasps and other mites that are natural predators of the spider mite — but not attracted to tomatoes — to Micek’s growing areas.

Micek, who first signed on with IPM nearly 15 years ago, considers the program “at the top of my list” of resources he relies on as a farmer. “I’m so busy doing so many other things. This is their priority: looking for mites on the crops.”

The net result has been the farm’s ability to eliminate what Micek refers to as the “old days” routine of applying pesticides roughly every two weeks. Last year, just a single pesticide application was necessary in one of the tomato tunnels, he said.

Rutgers introduced the IPM program in 1972 to help New Jersey corn growers manage their harvests without an overreliance on pesticides.

However, thanks to a black light trap and field monitoring by IPM technicians, Von Thun Farms in Monmouth Junction is able to control the population of the voracious corn predators — limiting pesticide use to only when pest levels hit the threshold mark.

“No consumer likes to see an earworm on their corn when they get ready to put their butter on,” said Robert Von Thun Jr., who operates the farm with his wife. “(IPM) makes the grower’s life easier. It takes out a lot of the guesswork.”

Von Thun also credits IPM with saving approximately $7,000 worth of the farm’s Jersey tomatoes three seasons ago, after scouts detected a slight discoloration on some isolated tomato plants. Plant samples were taken to Rutgers’ Plant Diagnostic Laboratory in New Brunswick, where the problem was quickly diagnosed — allowing for prompt application of a fungicide.

Backed by constant data collection and research, the IPM program tries to find the best alternatives to pesticides.

Female scent-bearing pheromones are generously scattered at some farms to disrupt the reproduction of certain pests, tricking the males and leaving many of the females unmated.

Organic bacteria such as bacillus thuringiensis, or Bt, which is safe for humans and beneficial insects but kills destructive caterpillars when they attempt to digest it, might be prescribed for sweet corn, said Dr. George Hamilton, chair of Rutgers’ entomology department and leader of the Pest Management Program.

In other cases, a switch to naturally bred varieties of bell peppers, cucumbers, squash, melons and other crops resistant to fungi is recommended.

“There are lots of things that we can do other than spraying pesticides,” Hamilton said.

To stay informed of current pest problems — and innovations in keeping the pests at bay — IPM farmers attend twilight meetings, in addition to receiving weekly blogs and bulletins.

Rutgers’ online “Plant & Pest Advisory” updates, along with weekly mapping of the intensity levels of New Jersey’s notorious agricultural pests, are available to the public free of charge.