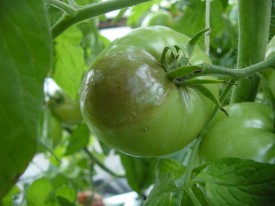 Late blight, a serious disease that affects tomato and potato crops and caused by Phytophthora infestans, the pathogen largely responsible for the Irish Potato Famine in the mid 1800s, last threatened New Jersey’s tomato and potato industry in 2009. The disease, which has the potential to become a major problem because it can quickly kill affected plants and its spores are easily carried in wind currents to infect other susceptible plants, has appeared this summer in New Jersey. Rutgers New Jersey Agricultural Experiment Station has responded robustly to this latest outbreak and its scientists are mounting an aggressive response to this threat to the New Jersey farm community. Read more on the story here.