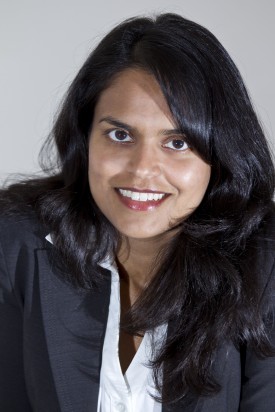 Roopchand recently completed a National Institutes of Health (NIH) T32 Postdoctoral Fellowship with the Pennington/Louisiana State University-Rutgers NIH Center on Botanical Approaches to Combat Metabolic Syndrome prior to being promoted to her current position. NIH T32 grants help ensure that a diverse and highly trained workforce is available to assume leadership roles to advance the nation’s biomedical and clinical research agenda. Roopchand’s cross-disciplinary academic research experience spans the areas of metabolic syndrome, diabetes, cell cycle and cancer biology. In addition, she’s spent four and a half years of working experience in the pharmaceutical and botanical dietary supplement industries.

Roopchand ‘s research at Rutgers centers on the role of plant-produced compounds in human health and nutrition. She and colleagues in the Ilya Raskin laboratory have developed and characterized a food-based technology that uses protein-rich matrices, such as soybean or pea protein, to selectively capture, concentrate and stabilize beneficial antioxidant polyphenol compounds from fruits and vegetables, while excluding water and excess sugar. This technology leverages the natural affinity of polyphenols for proteins and converts perishable, seasonal produce into shelf-stable food ingredients that can be used for developing healthy, low-calorie, functional food products that co-deliver protein and concentrated polyphenols.  Polyphenol-enriched proteins have demonstrated in vitro and in vivo efficacy in metabolic syndrome and diabetes models. Roopchand’s research in polyphenol-enriched proteins and functional foods became a foundation of Nutrasorb, LLC, a Rutgers spin-off company.

The award is named in honor of Arthur C. Neish (1916-1972). In the 1950’s and 1960’s, Neish was a pioneer in the synthesis and use of radiolabeled precursors and was one of the major contributors to knowledge of plant natural product biosynthetic pathways. He was a strong mentor of young scientists and has been recognized by having the award named after him. Funds supporting this endeavor were donated by the Phytochemical Society of North America, the National Science Research Council of Canada, Pfizer Corporation and private donors. The first young investigator awards were presented in 1999 at the PSNA meeting in Montreal, Canada.