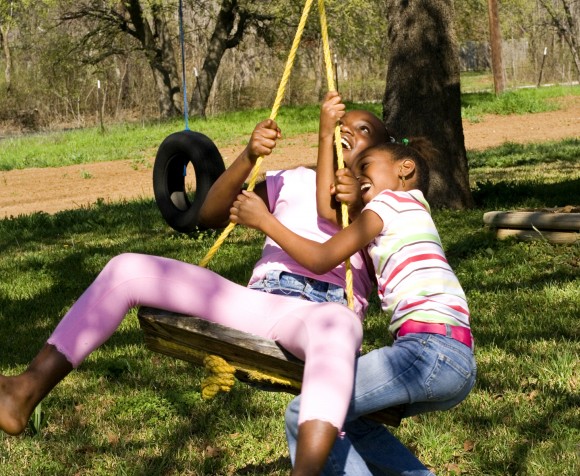 The incidence of overweight children has reached epidemic proportions in the U.S., with obesity rates having nearly tripled to almost 20% over the last 30 years. Besides simply eating too much, childhood overweight is associated with low levels of physical activity.

While less time for physical education in schools and more time spent in sedentary pursuits like video games have been blamed, environmental factors such as presence of bees or mosquitoes might conceivably keep children from wanting to play outdoors. Since children’s outdoor available playtime is greater in the summer, scientists at Rutgers University recently tested the hypothesis that day-biting mosquitoes might indirectly contribute to child obesity by reducing the amount of summer outdoor play.

They compared the prevalence of Asian tiger mosquito Aedes albopictus on child outdoor physical activity in two matched suburban communities in Monmouth County, one treated for mosquito abatement and one untreated. In the summer of 2009, a group of 1,000 contiguous private resident yards in Cliffwood Beach was selected as the intervention site, and an equivalent number of yards in the matching town, Union Beach, were left untreated for comparison. In 2011, intervention and untreated communities were reversed.

The scientists first looked at the effect of the mosquitoes’ prevalence on adult outdoor activity. Adults reported spending 7.3 hours outside over a summer’s week in barbecuing and eating outdoors, against the 10.2 hours they estimated they would have spent outdoors if mosquitoes were not a problem—a difference of 2.9 hours instead spent in indoor pursuits. This parental-report data is even more striking for their children, aged eight to 12 years old, as time spent in outdoor play was estimated to be 63% less than it would have been if mosquitoes were not a persistent annoyance.

“Not surprisingly, our findings suggest that in the locations where there was systematic abatement efforts, the children spent more time outdoors playing,” said Worobey.

The adult mosquito populations were monitored using traps and controlled by applications of insecticides, plus a robust door-to-door educational effort to inform homeowners on ways to help suppress mosquitoes in their own backyards.

According to Fonseca, the Asian tiger mosquito is a difficult species to control because of the ubiquity and proximity to humans of its larval habitats. “It is nearly impossible for an abatement district to eliminate all of these mosquito sources from people’s yards or even effectively to treat all of them with insecticides,” she said.

To make matters worse, Ae. albopictus bites during the day when residents want to use outdoor spaces for various activities, generating many complaints to county and state mosquito control programs.

The Center for Vector Biology at Rutgers collaborated with the Mercer County Mosquito Control, the Monmouth County Mosquito Extermination Commission and economists from the Heller School of Public Health, Brandeis University, to assess the most cost-effective ways to control this mosquito. The assessment was funded by the USDAARS.

An important finding was that homeowners informed through outreach education by mosquito control programs can significantly decrease the number of nuisance adult Ae. albopictus in their backyards.

“With little effort, homeowners can reduce the number of medium-sized pockets of standing water such as those that accumulate in buckets (often used for keeping recycling items), flower pot saucers and tires,” said Gaugler, who also heads the Center for Vector Biology at Rutgers.

Residents can learn how to reduce mosquito breeding habitats around their home by watching Simple Steps to Keep Mosquitoes from Breeding in Your Yard.