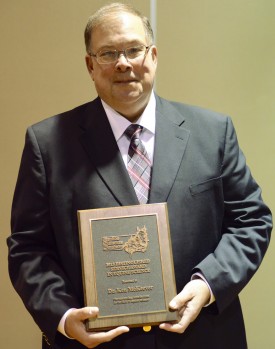 Ken McKeever was awarded the Distinguished Service Award from the Equine Science Society.

Kenneth McKeever, associate director for research at the Equine Science Center at Rutgers University and professor in the Department of Animal Sciences at the Rutgers School of Environmental and Biological Sciences, received the Equine Science Society’s (ESS) most prestigious honor, the Distinguished Service Award in Equine Science, on May 31. The award was presented during the annual ESS conference in Mescalero, New Mexico.

The Distinguished Service Award in Equine Science recognizes outstanding contributions in the field of equine science. Award recipients must also have a record of significant accomplishments in teaching, research and extension or service as it relates to advancement of the equine sciences and horse industry.

McKeever joined the faculty in the Department of Animal Sciences at Rutgers University in 1995 as an Associate Professor and proceeded to build, develop and coordinate one of the most active Equine Exercise Physiology laboratories in the country.

On a basic level, his research has focused on comparative exercise and cardiovascular physiology with a particular interest in the effects of aging on the integration of the cardiovascular, renal, and endocrine systems in the control of blood pressure, blood volume and fluid and electrolyte balance.

On an applied level, McKeever’s research has focused on the effects of performance enhancing practices on the physiological responses of the equine athlete. Research projects have examined the effects of various drugs including clenbuterol, enalapril, Epogen, ephedra, and various potential alkalinizing agents. Recently, McKeever and a team of colleagues and students from multiple departments and institutions partnered with the United States Department of Defense to examine the anti-inflammatory and performance effects of various food extracts. Those studies have demonstrated that flavanols in cranberry and black tea reduce exercise-induced inflammation, a finding that may lead to reduced reliance on NSAID drugs in human soldiers as well as equine athletes.

Over the last 32 years McKeever and his collaborating students and colleagues have charted new ground in a number of areas of endocrinology, demonstrating the effects of exercise and training on the hormones that control blood pressure and blood volume. Those studies increase the understanding of the mechanism behind high blood pressure. Studies have also looked at the hormones associated with the control of energy balance and appetite with application towards understanding anorexia and obesity in humans and horses.

“What excites me the most is knowing that my efforts contribute to training the next generation of integrative and regulatory physiologists who will follow in the footsteps of all of the great researchers who have used the horse as an animal model and exercise as one of their tools to make new and important discoveries benefiting horses and humans,” says McKeever.

Additionally, many of McKeever’s research studies have examined the effects of various drugs on performance. Partnerships with the NJ State Police Equine Drug Detection Laboratory have yielded critical information that has been used in formulating new detection methods. His research has also been an asset for a number of court cases, as well as in policy formulation by the Racing Commission in New Jersey as well as other states.