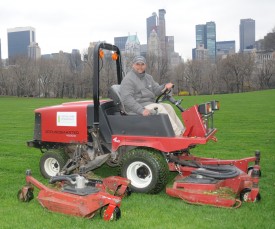 Rutgers University’s bond with Central Park is as strong as the hardy grass a Rutgers professor plucked from Sheep Meadow in the 1960s and cultivated into world-class turf.

Rutgers and the Central Park Conservancy (CPC), a non-profit organization responsible for the restoration, maintenance and enhancement of the iconic park in Manhattan, have strengthened their collective expertise in horticulture and turf care ever since through years of collaboration and training.

“The partnership between Rutgers and the Central Park Conservancy is preparing the next generation of environmental stewards with the tools to manage landscapes and help them flourish,” said Douglas Blonsky CC’83, president and chief executive officer of CPC and a Rutgers graduate.“We get professional advice from the people who are doing the research, and the conservancy shares what it’s doing in the field,” added Russell Fredericks CC’91, CPC’s chief of operations and another Rutgers alumnus. “Having that back and forth goes a long way.’’

Rutgers’ link to Central Park goes back at least to 1962, when the late professor C. Reed Funk took samples of ryegrass in Sheep Meadow that managed to thrive despite having no fertilization or irrigation – and plenty of foot trampling. Reed used the grass’ genetics to breed Manhattan perennial ryegrass, which became one of the most successful commercial turfgrasses produced for sports fields and lawns (it is now in its fifth generation).

Like Manhattan itself, Central Park had hit a low point in 1980 – after decades of neglect – when a group of volunteers founded the Central Park Conservancy to restore the 843-acre park to its 19th-century splendor. CPC’s enormously successful efforts were rewarded in 1998, when the city formalized the conservancy’s stewardship in a contract that put the non-profit in charge of the park’s day-to-day operations.

Responsible for the private fundraising of the majority of its $46 million annual budget, CPC has raised more than $550 million to date, including a $100 million gift from the Paulson Family Foundation in October. World renowned for park management, CPC has overseen the investment of more than $750 million.

Blonsky joined CPC in 1985, two years after earning a Bachelor of Science Degree in Landscape Architecture at Rutgers’ Cook College (now the School of Environmental & Biological Sciences).  The New York State-registered landscape architect oversaw many of Central Park’s notable restorations, including that of the famed Great Lawn, and he established the park’s zone management system, creating 49 zones with one gardener in charge of each to ensure accountability (Strawberry Fields, with funding from John Lennon and Yoko Ono, was the first area managed that way). Under Blonsky’s leadership, park use has tripled to more than 40 million visitors a year.

“My education at Cook College gave me the tools to play a crucial role in the decades-long transformation of Central Park,” said Blonsky, whom New York City appointed Central Park administrator. 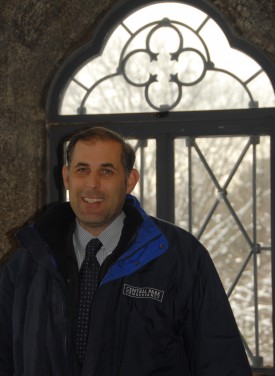 When faced with a turf or horticulture quandary, Fredericks doesn’t hesitate to call a Rutgers scientist for guidance. Such was the case three years ago, when the soccer fields in the park’s North Meadow were worn thin by constant, intense use.

The Conservancy turned to Rutgers extension specialist James Murphy, whose research showed the effectiveness of more frequent, high-concentration seeding. CPC began seeding fields twice a week instead of just once at the end of the fall season, using 15 pounds of seed per 1,000 square feet – double the normal amount.

The following year, CPC implemented another of Murphy’s recommendations: taking one of the six soccer fields out of service each fall and restoring it on a rotating basis.

“It definitely made an overall difference in the quality of the turf,” said Fredericks, who earned a Bachelor of Science Degree in Environmental Planning and Design with a minor in plant science from Rutgers in 1991.

The relationship is a two-way street; CPC’s standing as a world-renowned park manager has also proven to be a tremendous resource for Rutgers and its students. 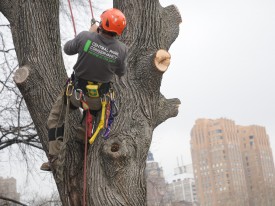 Murphy, who has been on the Plant Biology and Pathology Department faculty for 21 years, said he takes classes on field trips to Central Park because “it has one of the most advanced management systems I’ve ever seen. For me, it’s a field lab and there’s a lot to be learned there.”

Rutgers and CPC run internship programs that give students hands-on experience in Central Park. Last summer, Dev Saha, a Rutgers senior double majoring in agriculture science and environmental business, worked alongside Central Park staffers and interacted with the public visiting the park – an experience he’d not had at other gardens.

“Being park ambassadors was a big part of it,” said Saha, noting visitors inquired about projects the staff and interns were working on. “For us to have that experience was really awesome.” A plant lover, the 22-year-old Hillsborough resident plans to start his own nursery.

“Rutgers University consistently provides us with interns who are passionate about the environmental sciences and eager to apply what they’ve learned at Rutgers to one of the most extraordinary urban parks in the world,” Blonsky said.

“We like to send our staff to Rutgers courses because of the quality of the presenters: their instructors (including Murphy and Brad Park) are well respected industry professionals,’’ said John Dillon, CPC’s director of Horticulture for Turf and Tree Care. Dillon, a 1991 graduate of the Rutgers Professional Golf Turf Management School two-year certificate program, oversees the care of 250 acres of turf and more than 24,000 trees, as well as the park’s composting operation.

In February, Dillon lectured at a Rutgers continuing education course entitled “Reducing Pesticide Inputs and Exploring Organic Options for Sports Turf.”  The Conservancy is a leader in Integrated Pest Management, using as many natural methods as possible to limit pest damage.

CPC staff, from upper management to groundskeepers, have participated in many of Rutgers courses, including Managing Insect Pests of Ornamental Plants, Invasive Species Seminar: Diseases, and Athletic Field Construction & Maintenance. They also have attended Rutgers Turfgrass Research Field Days where they get the latest information to help them improve their turf and sports field management practices. 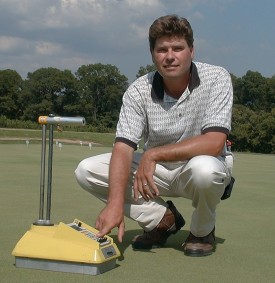 “We always strive for all our classes to be ruthlessly practical; having CPC staff as instructors shows how these best practices are being applied on the ground today,” said Jim Morris, associate director of Rutgers Office of Continuing Professional Education.

Morris noted that attendees of Rutgers continuing education courses have years of field experience under their belts, so “they bring a wealth of information of what works and what doesn’t work.”

From continuing education to the undergraduate experience to expert consultation, the connections between Rutgers and the Central Park Conservancy run long and deep, and seem primed for at least another fifty years of collaboration.